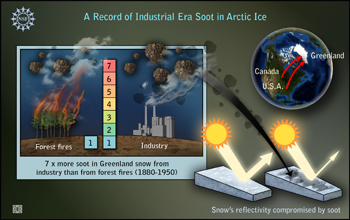 New research shows that industrial development in North America between 1850 and 1950 greatly increased the amount of black carbon--commonly known as soot-- that fell on Greenland's glaciers and ice sheets. The soot impacted the ability of the snow and ice to reflect sunlight, which contributed to increased melting and higher temperatures in the region during those years. This discovery may help scientists better understand the impact of human activities on polar climates.

In an article published today in the online edition of Science magazine, a team led by Joe McConnell and Ross Edwards from the Desert Research Institute (DRI) in Reno, Nev., report that these increased levels of soot deposits were the result of human activity and in some years were as much as eight times larger than naturally-occurring soot deposits measured in the years before 1850.

The research, funded by the National Science Foundation and NASA, indicates that these elevated levels of soot decreased the snow and ice pack's ability to reflect sunlight. This decreased level of reflectivity, or albedo, in scientific terms, allowed the surface to absorb more energy from the sun. These changes may have resulted in earlier snow melt and exposure of darker rocks, soil and sea ice, leading to warming throughout Greenland in the late 19th and early 20th century when soot levels were at their highest.

Using a new method for measuring soot in snow and ice, researchers captured and analyzed ice core samples from various regions of Greenland. These samples allowed them to analyze annual deposits of soot and other chemical going back more than two centuries. The results show that the source of most of the black carbon soot landing in the region changed from natural causes such as forest fires and volcanic eruptions to industrial sources.

"In addition to black carbon, we measured a broad range of other chemicals at very high depth resolution in this same ice core," said lead author McConnell.

Among the other chemicals measured were vanillic acid and sulfur, two indicators of forest fire and industrial emissions, respectively. "When we compare changes in the black carbon to changes in these other indicators, it is clear that most of the increases in black carbon in the late 19th and early 20th centuries, particularly in winter and spring, resulted from industrial emissions - probably from coal burning," McConnell added.

The amount of black carbon deposited during this period increased quickly, reaching a peak around 1910.

A team of researchers from DRI, the University of California, the University of Wisconsin, and Droplet Measurement Technologies combined the measurements of these deposits with sophisticated modeling to measure how the soot traveled from North America to Greenland and how it impacted the region's climate.

"We used computer models to simulate the climate forcing impact of the observed changes in soot concentrations in Greenland snow during the past 215 years," said co-author Mark Flanner from the University of California.

Simulations were also used to extend the climate forcing results from central Greenland to the entire Arctic based on regional-scale models. From these simulations, the average impact from soot pollution over the Arctic was about double that found for central Greenland. Early summer climate forcing throughout the Arctic during and after industrialization was substantial, with changes largely attributed to winter-time pollution. In the peak period from 1906 to 1910, the warming effect of the industrial soot throughout the Arctic was estimated at eight times that during the pre-industrial period.

By tracking the possible trajectories of major snowfalls events that would have transported and deposited the black carbon to largely undeveloped Greenland, the researchers conclude that industrial areas of the United States and Canada were the most likely sources of the increased soot levels during the past century. Boreal forest fires in northern and eastern Canada and the United States were the likely sources of the natural black carbon found in the ice core.

These findings have the potential to help climate scientists better understand the impact of human activity on polar climates.

Co-author Edwards added, "In order to understand why Arctic climate is changing so rapidly at present, we need to understand how and why it has changed both before and after human activities had an influence on climate. To do this properly, we need to know the seasonal history of soot deposition and its impact on Arctic snow albedo during the past few centuries. Our results allow this component of climate change to be incorporated into predictive climate models in a more realistic way."