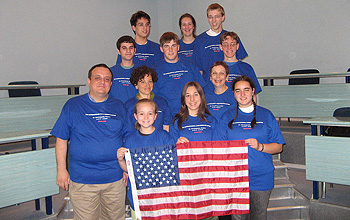 The U.S. team at the 2007 International Linguistics Olympiad in St. Petersburg, Russia.

Six American high-school students took the top honors in the 2007 International Linguistics Olympiad in St. Petersburg, Russia earlier this month. This year was the first time a delegation represented the United States at the annual competition. Their victory brings a new focus on computational linguistics.

This year's International Olympiad featured 15 teams representing 9 different countries, including the Netherlands, Russia and Spain. Competitors were given problem sets consisting of sentences in languages most people are not familiar with, including: Tatar; Georgian; a language spoken by indigenous people in Bolivia called Movima; the Papua New Guinean language Ndom; Hawaiian; Turkish; and their English translations. With just this information, the competitors then had to translate more sentences from these languages into English. Winners were judged by how accurately and quickly they could figure out the rules and structure of the languages and complete their translations.

Eight high school students from the U.S. competed in the fifth Olympiad from August 1-4, 2007. Adam Hesterberg, of Seattle, Wash., obtained the highest score of all participants in the individual competition. Jeffrey Lim of Arlington, Mass. received top prize for the best solution to one of the problems. In addition, Rebecca Jacobs of Los Angeles, Calif., Joshua Falk of Pittsburgh, Penn., Michael Gottlieb of Dobbs Ferry, N.Y. and Anna Tchetchetkine, of San Jose, Calif. won the top prize in the team competition in a tie with a Russian team.

Other American team members were U.S. champion Rachel Zax and Ryan Musa, both of Ithaca, N.Y. The U.S. teams were coached by Dragomir Radev, of the University of Michigan. Also providing leadership for the teams were Lori Levin of Carnegie Mellon University, Thomas Payne of University of Oregon and Amy Troyani of Taylor Allderdice High School, Pittsburgh, Penn.

The U.S. teams were selected from finalists of the North American Computational Linguistics Olympiad (NACLO) that took place on March 29, 2007, at four different locations across the country, as well as over the Internet.

Aside from being a fun intellectual challenge, the Olympiad mimics the skills used by researchers and scholars in some areas of the field of computation linguistics, which is increasingly important for the United States and other countries. Using computational linguistics, these experts can develop automated multilingual technologies such as translation software that cut down on the time and training needed to work with other languages, or software that automatically produces informative English summaries of documents in other languages or answer questions about information in these documents. In an increasingly global economy where businesses operate across borders and languages, having a strong pool of computational linguists is an important competitive advantage. With threats emerging from different parts of the world, developing computational linguistics skills has also been identified as a vital component of national defense in the 21st century.

Because of the growing importance of this intriguing field, the National Science Foundation initiated NACLO, funding a planning workshop in September 2006, and, together with the North American chapter of the Association for Computational Linguistics, Google, and others helped fund the NACLO this spring that selected the members of Team USA, as well as the team's trip to the International Olympiad. The participants and their families also made contributions to bring the team to St. Petersburg for the Olympiad.

Organizers are planning to expand the size and number of locations for next year's NACLO competition in order to bring another strong team back to the 2008 Olympiad, which will be held in Bulgaria. Coach Radev says "now that everyone is aware of the strength of the US team, we can no longer count on the surprise factor. For next year, we will need to build an even stronger team."