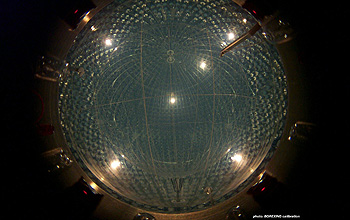 The fully-assembled Borexino detector is visible from multiple cameras embedded in the structure.

An international team of researchers has detected low-energy solar neutrinos--subatomic particles produced in the core of the sun--and measured in real-time the rate the particles hit our planet.

The researchers also obtained fresh evidence that neutrinos oscillate (transform from one state to another) before arriving at Earth, adding weight to present theories about the nature of neutrinos and the inner workings of the sun and other stars.

The team of more than 100 researchers, including National Science Foundation (NSF)-supported investigators at Princeton University and Virginia Tech, have operated the so-called Borexino experiment in one of the deepest laboratories in the world, the Gran Sasso Laboratory of the Istituto Nazionale di Fisica Nucleare (INFN, the Italian National Institute of Nuclear Physics), near the town of L'Aquila, Italy.

These are the first results from the Borexino experiment that has been under construction since the late 1990s with the support of INFN as the lead agency, NSF in the United States, and institutions in Germany, France and Russia.

"In making these first direct measurements of low-energy neutrinos coming from the sun, Borexino represents a convergence of our present understanding of neutrino properties and the physics of solar energy generation," said Brad Keister, program director for nuclear physics in NSF's mathematical and physical sciences directorate.

"The great depth of the laboratory and the incredible purity of the materials used in the detection were critical to the discovery and demonstrated the impact of eliminating background radiation from such experiments," added Keister.

Produced in the Big Bang, and more recently in stars and nuclear reactors, neutrinos are everywhere. They constantly bombard the Earth, but because they interact very weakly, chances are slim a neutrino will hit anything. More than 100,000,000,000,000 pass through each of us every second without our noticing them.

The 18-meter (59-foot) diameter Borexino detector lies more than a kilometer (almost a mile) underground in one of the planet's deepest laboratories. The depth blocks out cosmic rays and other radiation sources that could create additional background signals.

The detector is comprised mainly of concentric layers of radiation shielding. Within an external tank filled with 2,400 tons of water, an enormous stainless steel sphere lies anchored. Within the sphere are two nested nylon vessels, each containing successively purer detector fluids.

Neutrinos knock electrons out of atoms in the detector fluid, and in turn, the electrons generate photons as they travel further through the liquid environment.

Attached to the inside of the stainless steel sphere and facing inward is a suite of photomultipliers, 2,200 glass bulbs that look somewhat like floodlamps. Instead of creating light, each is capable of detecting the individual photons.

Because radioactive decay in stray uranium, thorium or other elements can produce photons, even impurities in the materials of the detector itself could generate false signals. To counter this, the researchers developed techniques to achieve an unprecedented level of purity for the fluids and all materials in the experiment.

"The Borexino team made a major leap forward in the field of low-radiation background measurements, reaching far lower background radiation than ever before," said Frank Calaprice, the principle investigator of the Princeton University team. "The first part of the strategy was to use a simple detection liquid that could be purified by standard methods such as distillation. The second component was to house the liquid in a clean, low-background containment vessel."

The Borexino experiment measures the flux of neutrinos passing through the detector, and this rate is critical for confirming theories for how neutrinos oscillate.

Researchers have long known that neutrinos were generated by fusion reactions in the sun's core, but the model predicted more neutrinos than had been seen.

In recent years, physicists have theorized that neutrinos produced in the sun transform back and forth, or oscillate, into other "flavors" of neutrinos. Earlier measurements of higher-energy neutrinos have shown that the solar models appear to be correct, but due to oscillations, only a fraction of the neutrinos with the original flavor is detected.

"We've learned a lot from higher energy neutrinos in recent years," said Keister. "But the issue has remained that we haven't looked directly at the energies where most of the neutrinos have been produced."

Now, the Borexino measurement of low-energy neutrinos confirms this picture, including the expected neutrino deficit.

"This eagerly awaited physics result is an excellent example of an international collaboration undertaking an extremely challenging measurement," said Bruce Vogelaar, the principal investigator of the Virginia Tech team. "The Borexino detector will now move into a precision measurement phase and we will be able to uniquely probe some of the most important fundamental properties of neutrinos and our sun."

The study has so far involved 100 professionals, including physicists, engineers, and technicians, and included INFN sections at the Universities of Milan, Genoa, and Perugia and the laboratories of Gran Sasso; Princeton University and Virginia Tech in the United States; the Technische Universität of Munich; the Max Planck Institute of Heidelberg; the French Laboratory for Astroparticle Physics and Cosmology; the Jagellonian University of Krakow; the Joint Institute for Nuclear Research in Dubna; and the Kurchatov Institute of Moscow.

The research preprint is now available online at the arXiv server, a leading pre-publication posting site for physics discoveries.

Additional information on the experiment, the results and the facility is available on the INFN website.