Groundwork laid for next generation of space flights 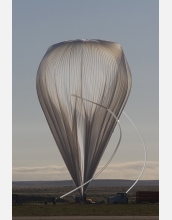 This balloon carried a solar telescope to new heights, a scientific and engineering feat.

In a landmark test flight, the National Center for Atmospheric Research (NCAR) in Boulder, Colo., and a team of research partners this month successfully launched a solar telescope to an altitude of 120,000 feet, borne by a balloon larger than a Boeing 747 jumbo jet.

The test clears the way for long-duration polar balloon flights beginning in 2009 that will capture unprecedented details of the Sun's surface.

"This unique research project will enable us to view features of the Sun that we've never seen before," said Michael Knölker, director of NCAR's High Altitude Observatory and a principal investigator on the project. "We hope to unlock important mysteries about the Sun's magnetic field structures, which at times can cause electromagnetic storms in our upper atmosphere and may have an impact on Earth's climate."

The project, known as Sunrise, is an international collaboration involving NCAR, NASA, the Max Planck Institute for Solar System Research in Germany, the Kiepenheuer Institute for Solar Physics in Germany, the Astrophysics Institute of the Canary Islands in Spain and the Swedish Space Corporation. Additional U.S. partners include the Lockheed Martin Corporation and the University of Chicago.

Funding for NCAR's work on the project comes from NASA and from the National Science Foundation (NSF), NCAR's primary sponsor.

"This successful balloon flight is an amazing engineering feat; it will pave the way for a more complete understanding of the solar magnetic field," said Cliff Jacobs of NSF's atmospheric sciences division.

The project may usher in a new generation of balloon-borne scientific missions that can be undertaken at far less cost than sending instruments into space. Scientists can test an instrument on a balloon before making a commitment to launch it on a rocket.

The balloon, with its gondola of scientific instruments, was launched successfully on the morning of October 3 from the National Scientific Ballooning Facility in Fort Sumner, New Mexico.

It flew for about 10 hours, capturing stable images of the solar surface and a wealth of test data on the various elements of the sophisticated payload. The balloon then was collapsed and the gondola descended with a parachute, landing safely in a field outside Dalhart, Texas.

"We were able to verify the workings of the entire system end to end," said David Elmore, an NCAR engineer who oversaw the test flight. "We can now move on to planning the first full-scale mission with confidence."

The goal of the Sunrise project is to investigate the structure and dynamics of the Sun's magnetic fields. The fields fuel solar activity, including plasma storms that buffet Earth's outer atmosphere and affect sensitive telecommunications and power systems. The fields also cause variations in solar radiation, which may be a significant factor in long-term changes in Earth's climate.

The Sunrise project is scheduled for a multiday flight over the Arctic in the summer of 2009, launching from Kiruna, Sweden. By taking advantage of the midnight Sun, the telescope will be able to capture continuous images for a period of several days to as long as two weeks, possibly orbiting the Arctic.

It may be launched later on another long-distance flight over the Arctic or the Antarctic.

At an altitude of 120,000 feet, the telescope will rise above most of the turbulence of the atmosphere. It will be able to view images in the ultraviolet range, which allow for higher resolution but cannot be obtained from Earth's surface.

The telescope will capture features on the solar surface as small as 30 kilometers across, more than double the resolution achieved by any other instrument to date.

Scientists will be able to examine structures on the Sun that are key to understanding solar activity.

By observing the same area during an entire flight over high latitudes in summer, the telescope will enable scientists to continually witness changes in the magnetic fields without the interruption of night.

The Sunrise project has presented engineers with a number of extraordinary challenges. The balloon is designed to carry 6,000 pounds of equipment, including a 1-meter (39-inch) solar telescope, additional observing instruments, communications equipment, computers and disk drives, solar panels, and roll cages and crush pads to protect the payload on landing.

The equipment must be able to withstand dramatic changes in temperature, and the steel and aluminum gondola cannot vibrate in ways that could interfere with the operations of the telescope.

One of the most difficult aspects of the engineering work was to design the gondola in such a way that the telescope in flight would remain focused on a specific and relatively tiny area of the Sun, even while twisting on a soaring balloon for a week or longer during the full-scale research missions.

In addition to the telescope, the gondola on its full-scale research missions will carry a polarimetric spectrograph that will measure wavelengths in the Sun's electromagnetic spectrum and enable scientists to make inferences about its magnetic fields. Another instrument, known as an imaging magnetograph, will provide two-dimensional magnetic field maps.

Because the gondola is designed to withstand considerable force when it lands, the instruments can be launched on repeated missions.

"This is a very economical way of rising above the atmosphere and capturing images that cannot be captured from Earth," Knölker said. "What we are doing is laying the groundwork for the next generation of space flights."