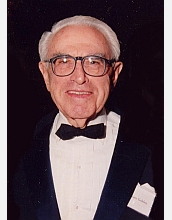 Although he never worked as a scientist and didn't receive his master's degree in biology until age 70, William T. Golden, who died Oct. 7, 2007, a few weeks short of his 98th birthday, was one of the most influential figures in post-World War II American science.

As a government advisor, trustee for museums and scientific organizations, and philanthropist, he helped shape the infrastructure for American science during the second half of the 20th Century. Best known for his forceful recommendation to President Harry S. Truman that the importance of science in the Cold War world demanded there be a science advisor to the president, he also was a major influence on the direction of many scientific and cultural organizations, including the National Science Foundation (NSF) during its formative period.

Growing up in the 1920s, at a time of great public interest in science fanned by Albert Einstein's theory of general relativity and the birth of quantum mechanics, Golden dreamed of becoming a physicist. But an aversion to higher mathematics led him to major instead in English and biology. After graduating from the University of Pennsylvania in 1930, he spent a year at the Harvard Business School. In 1931, Golden left Harvard to pursue a successful career in business.

Golden interrupted his business career to serve in the U.S. Navy during World War II. In 1946, he became an assistant to Atomic Energy Commissioner Lewis B. Strauss and helped organize that federal agency.

President Truman named Golden a special consultant to the director of the Bureau of the Budget on October 20, 1950. Golden's charge was to review the "organization and conduct of scientific research and development activities" in the federal government.

Among the issues of concern to Truman were the newly formed National Science Foundation, the relationship between civilian scientists and the military, the new role thrust upon American scientific research and development because of the "increasing responsibilities of the U.S.A. in world affairs," and the mobilization of science during national emergencies.

In naming Golden, Truman was tapping Golden's immense love of science, his knowledge of the ways of Washington, and his ability to listen, remember and summarize. During six intense months, Golden participated in more than 200 telephone conversations and face-to-face meetings with 150 scientists, administrators, military officers and Members of Congress. (His memorandum recapitulating his conversations and meetings are an invaluable historical record.) His first recommendation, sent to Truman on December 18, 1950, under the title, "Mobilizing Science for War," was the establishment of the position of scientific advisor to the president.

NSF might have had a very different history if not for Golden's vision and determination. For one thing, he was concerned with the relationship between NSF and the military. The legislation establishing NSF authorized the agency "to initiate and support scientific research activities in connection with matters relating to the national defense," should the secretary of defense request it. This was a controversial clause. In a February 1951 memorandum, Golden reported that the scientific community believed NSF "should confine its activities to furthering basic scientific research studies, and that it should not dilute its effectiveness by supporting studies of directly military or other applied character."

To help ensure that view, which matched Golden's own, Golden searched among the first NSF director candidates for someone who would not only make a good science administrator but who was sympathetic to the view that involvement with military research was undesirable for the agency.

Golden found the right candidate in Alan T. Waterman, a physicist who was then chief scientist for the Office of Naval Research. Golden's enthusiastic recommendation of Waterman to Donald S. Dawson, Truman's executive assistant, was probably decisive in the naming of Waterman, who steered NSF for its first 12 years.

Initially, Golden's programmatic recommendations for NSF were less successful. He believed that the agency should "study first and then act." He proposed as the initial order of business unclassified surveys ascertaining the levels of existing support for basic research and science education (including the social sciences and, implicitly, engineering), as well as surveys of manpower resources and the extent of support internationally. Only after gathering this information would NSF be in a position to "prepare its own program for the future," Golden said.

After ending his service to President Truman, Golden embarked on a life of stewardship and philanthropy. He was a trustee, board member or officer of nearly 100 scientific, educational and non-profit organizations. The American Association for the Advancement of Science, the New York Academy of Sciences, and the Carnegie Institution of Washington, among others, were recipients of his largess.

In 1991, the National Science Board presented Golden with a special award recognizing his "sustained and exemplary contributions to science policy," acknowledging his "seminal leadership in the articulation and implementation of a national science policy," his diligence in advancing the proposal for a presidential science advisor, and his role in determining "the substance and direction" of NSF.

Golden summed up his philosophy in his acceptance speech to the Board: "Homage, then, to science. Science is assuredly the Endless Frontier, and our country is indeed the land of opportunity. Let us all do all that we can to keep it that way and to make it better."