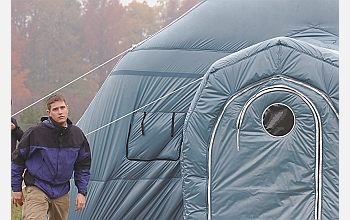 An inflatable prototype lunar habitat that will be tested in Antarctica.

The National Science Foundation (NSF) and the National Aeronautics and Space Administration (NASA) will use the Antarctica's frigid, harsh, isolated landscape to test a new architecture for astronaut housing on the moon. The agencies are sending a prototype inflatable habitat to the southernmost contient to see how it stands up to a year of use.

Officials watched the habitat as it was inflated one last time at a site in Frederica, Del., before it was packed and shipped to McMurdo Station, NSF's logistical hub in Antarctica. McMurdo is one of three year-round stations NSF operates in Antarctica in its role as manager of the U.S. Antarctic Program.

NSF and NASA are partners with ILC Dover, the company that manufactured the prototype structure, on the project. All three organizations will share data from the 13-month test, which will run from January 2008 to February 2009. An inflatable habitat is one of several concepts being considered for astronaut housing on the moon.

"Testing the inflatable habitat in one of the harshest, most remote sites on Earth gives us the opportunity to see what it would be like to use for lunar exploration," said Paul Lockhart, director of Constellation Systems for NASA's Exploration Systems Mission Directorate.

The inflatable structure looks something like a backyard moon bounce for children, but is far more sophisticated. It is insulated and heated, has electrical power, and is pressurized. It offers 384 square feet of living space and has, at its highest point, an eight-foot ceiling. During the test period, sensors will allow engineers to monitor the habitat's performance.

NSF is interested in lighter, easier-to-assemble habitats for use in the field in Antarctica. It currently uses a 50-year-old design known as a Jamesway hut, familiar to viewers of the television series M*A*S*H, that is bulky and complex in comparison to the habitat being tested. Modern variations on the Jamesway, although lighter, are still rigid and difficult to ship, with limited insulation. During the test of the new inflatable habitat, NSF will study improvements in packing, transportation and set up, as well as power consumption and damage tolerance for this newest variation of the concept.

NASA's Constellation Program is working to send humans back to the moon by 2020. After initial sorties, the astronauts will set up a lunar outpost for long-duration stays, and they'll need a place to live. The agency is developing concepts for habitation modules that not only provide protection for the astronauts, but are easy to get to the lunar surface.

"To land one pound of supplies on the lunar surface, it'll require us to launch 125 pounds of hardware and fuel to get it there," Lockhart said. "So our habitation concepts have to be lightweight as well as durable. This prototype inflatable habitat can be taken down and redeployed multiple times, and it only takes a crew of four a few hours to set up, permitting exploration beyond the initial landing area."

To enable lunar exploration, the Constellation Program is developing a new fleet of spacecraft and rockets, as well as transportation and power systems for use on the surface of the moon. The inflatable habitat is being developed under NASA's Innovative Partnerships Program.