Did Life Originate in a Mica Sandwich Sitting in Primordial Soup? 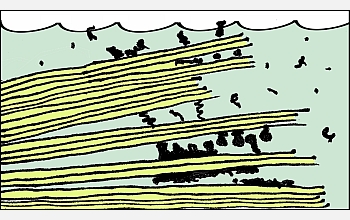 Earth's first life may have developed between the layers of a chunk of layered mica sitting like a multilayered sandwich in the primordial soup, according to a new hypothesis. The so called "soup and sandwich" mica hypothesis, which was developed by Helen Hansma of the National Science Foundation (NSF), proposes that that the compartments between layers of mica -- a common mineral that cleaves into smooth sheets -- could have provided the shelter and protection needed for molecules to reorganize into cells.

Hansma will present her "soup and sandwich" mica hypothesis at the annual meeting of the American Society for Cell Biology in Washington D.C,. on December 4, 2007.

Hansma says that her "soup and sandwich" mica hypothesis is supported by several lines of evidence, including the many chemical and physical similarities between a cell interior and the space between mica sheets. For example, both environments are potassium-rich and negatively-charged. Such similarities suggest that mica "would have provided a very hospitable environment to the earliest biomolecules," says Hansma.

In addition, the confined spaces formed by mica layers would have provided the isolation needed for Darwinian evolution. What's more, the expansion, contraction and movements of the mica sheets caused by temperature changes and ocean currents would have helped rearrange molecules and trigger the formation of bonds between them, as required for life to originate.

Providing further support to the Hansma mica hypothesis is the close proximity between a huge mica formation in Greenland to rock formations where ancient life is believed to have existed.

Other hypotheses about the origins of life include the idea that life originated in a prebiotic "soup" in ancient oceans. However, the so-called "soup" hypothesis can't explain how the earliest biomolecules -- sloshing around, unprotected in liquid -- would have joined, stayed together and organized into the complex structures of life. Another hypothesis known as the "pizza" hypothesis says that the earliest cells developed on mineral surfaces on land. But this hypothesis can't explain how those cells would have obtained the right amount of water to survive.

Hansma's passion for mica dates back to the 1980s, when she began her NSF-funded work developing pioneering techniques in biological atomic force microscopy (AFM), an imaging technique.

"We put our samples on mica, because it is so atomically flat, so flat that we can see even bare DNA molecules as little ridges on the mica surface," said Hansma. "The layered mineral is made of sheets so thin (one nanometer) that there are a million of them in a millimeter-thick sheet of mica."

Hansma came upon her "soup and sandwich" mica hypothesis one day last spring when -- still a mica devotee -- she was splitting some mica under her dissecting microscope. She had collected the specimens in a mica mine in Connecticut. The mica was covered with organic material. "As I was looking at the organic crud on the mica, it occurred to me that this would be a good place for life to originate -- between these sheets that can move up and down in response to water currents which would have provided the mechanical energy for making and breaking bonds," said Hansma.

Hansma summed up her hypothesis of the origin of life by saying, "I picture all the molecules of early life evolving and rearranging among mica sheets in a communal fashion for eons before budding off with cell membranes and spreading out to populate the world."