Metal Foam Has a Good Memory 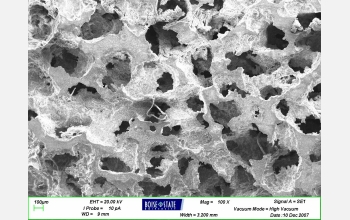 Voids of space between thin, curvy struts of metal alloy give the alloy magnetic shape memory.

In the world of commercial materials, lighter and cheaper is usually better, especially when those attributes are coupled with superior strength and special properties, such as a material's ability to remember its original shape after it's been deformed by a physical or magnetic force.

A new class of materials known as "magnetic shape-memory foams" has been developed by two research teams headed by Peter Müllner at Boise State University and David Dunand at Northwestern University, both funded by the National Science Foundation (NSF).

The foam consists of a nickel-manganese-gallium alloy whose structure resembles a piece of Swiss cheese with small voids of space between thin, curvy "struts" of material. The struts have a bamboo-like grain structure that can lengthen, or strain, up to 10 percent when a magnetic field is applied. Strain is the degree to which a material deforms under load. In this instance, the force came from a magnetic field rather a physical load. Force from magnetic fields can be exerted over long range, making them advantageous for many applications. The alloy material retains its new shape when the field is turned off, but the magnetically sensitive atomic structure returns to its original structure if the field is rotated 90 degrees--a phenomenon called "magnetic shape-memory."

Making large single crystals of the alloy material is too slow and expensive to be commercially viable -- one of the reasons why gems are so costly -- so the researchers make polycrystalline alloys, which contain many small crystals or grains. Traditional polycrystalline materials are not porous and exhibit near zero strains due to mechanical constraints at the boundaries between each grain. In contrast, a single crystal exhibits a large strain as there are no internal boundaries. By introducing voids into the polycrystalline alloy, the researchers have made a porous material that has less internal mechanical constraint and exhibits a reasonably large degree of strain.

The researchers created the new material by pouring molten alloy into a piece of porous sodium aluminate salt. Once the material cooled, they leached out the salt with acid, leaving behind large voids. The researchers then exposed the porous alloy to a rotating magnetic field. The level of strain achieved after each of the over 10 million rotations is consistent with the best currently used magnetic actuators, and Müllner and Dunand expect to significantly improve the strain when they have further optimized the foam's architecture.

"The base alloy material was previously known, but it wasn't very effective for shape-memory applications," Dunand said. "The porous nature of the material amplifies the shape-change effect, making it a good candidate for tiny motion control devices or biomedical pumps without moving parts."

NSF Program Director Harsh Deep Chopra agrees. "It's the first foam to exhibit magnetic shape memory - it has great potential for uses that require a large strain and light weight such as space applications and automobiles. These materials are able to do more with less material given their foamy structure and provide a sustainable approach to materials development."