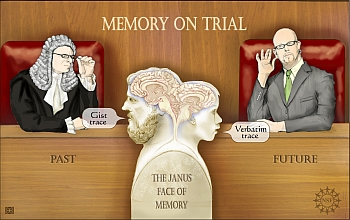 Researchers Valerie Reyna, human development professor, and Chuck Brainerd, human development and law school professor -- both from Cornell University -- argue that like the two-headed Roman god Janus, memory is of two minds -- that is, memories are captured and recorded separately and differently in two distinct parts of the mind.

Reyna's and Brainerd's research, funded by the National Science Foundation, Arlington, Va., sparked more than 30 follow-up memory studies, many of them also funded by NSF. The researchers review the follow-on studies in an upcoming issue of Psychological Bulletin.

Tis research shows that meaning-based memories are largely responsible for false memories, especially in adult witnesses. Because the ability to extract meaning from experience develops slowly, children are less likely to produce these false memories than adults, and are more likely to give accurate testimony when properly questioned.

The finding is counterintuitive; it doesn't square with current legal tenets, and may have important implications for legal proceedings.

"Because children have fewer meaning-based experience records, they are less likely to form false memories," says Reyna. "But the law assumes children are more susceptible to false memories than adults."

The court's reliance on adult testimony has a long history. Before the early 1970s, children younger than eight years old rarely testified, because they failed the court's competency requirements.

Then in the 1970s, when statistics showed an increase in the number of child abuse cases, courts were forced to allow the testimony of young victims, only to reemphasize adult testimony in the 1990s, when some children's testimony was proven to be unreliable.

"Courts give witness instructions to tell the truth and nothing but the truth," says Brainerd. "This assumes witnesses will either be truthful or lie, but there is a third possibility now being recognized -- false memories."

According to Brainerd, "Things are about to change radically."

Traditional theories of memory assume a person's memories are based on event reconstruction, especially after delays of a few days, weeks, or months. However, Reyna and Brainerd's Fuzzy Trace Theory hypothesizes that people store two types of experience records or memories: verbatim traces and gist traces.

False memories can be identified when witnesses accurately describe what they remember but those memories are proven false based on other unimpeachable facts.

"When gist traces are especially strong, they can produce phantom recollections -- that is, illusory, vivid recollections of things that did not happen, such as remembering a robber brandished a weapon and made threatening statements," says Reyna.

Brainerd argues that because witness testimony is the primary evidence in criminal prosecutions, false memories are a dominant reason for convictions of innocent people.

Recently, in Cook County, Ill., more than 200 murder confessions were identified as being based on adult's false memory reports because they conflicted with unimpeachable facts. For example, a person may have falsely remembered being in one location, but a sales receipt showed that he was in another location at the same time a crime was committed.

In child abuse cases where the law gives the benefit of the doubt to adult testimony, the results can be even more disconcerting. "Failure to recognize differences in how adults and children produce memory unfairly tilts the U.S. legal system against child witnesses," says Reyna.

"Children do not have the same fullness of emotional and intellectual experience as do adults when it comes to deriving meaning from situations," says Reyna. "So, meaning-based memory is less likely to influence a child's testimony."

The researchers say their transformative "two-mind" memory approach can reduce the number of false memories in court cases and give more validity to children's testimony.

Reyna and Brainerd developed several mathematical models associated with Fuzzy Trace Theory that can be used to predict memory outcomes in both adults and children.

The models, which test memory, have been used to determine ways in which attorneys, investigators, law enforcement officials and others can ask questions to help people access verbatim memories while suppressing false memories. The researchers say using neutral prompts to cue witnesses can help them remember what actually happened.

Reyna and Brainerd also say returning a witness to the scene of an event in a highly neutral way can cue verbatim memories and help the legal process.

The models provide the most accurate information to date on the causes of false memories. Using them, researchers can determine with surprising accuracy when a person accesses both verbatim and gist memory.

Reyna and Brainerd's findings are summarized in a new book, The Science of False Memory, published by Oxford University Press.