A Planet in Progress? 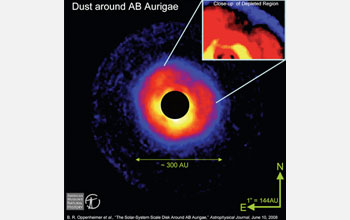 An object appears to be forming from gas and dust around the star AB Aurigae.

Scientists are one step closer to understanding how new planets form, thanks to research funded by the National Science Foundation (NSF) and carried out by a team of astrophysicists at the American Museum of Natural History.

Ben R. Oppenheimer, assistant curator in the museum's Department of Astrophysics, and his colleagues have used the Lyot Project coronograph attached to a U.S. Air Force telescope on Maui, Hawaii, to construct an image of material that seems to be coalescing into a body from the gas and dust cloud surrounding AB Aurigae, a well-studied star. The body is either a planet or a brown dwarf--something with mass between a star or a planet. Brown dwarfs have been found orbiting stars since a team that included Oppenheimer first discovered one in 1995.

The research results, accepted for publication in June's Astrophysical Journal, represent a significant step toward direct imaging and the study of exoplanets, which orbit stars other than the Sun, and may advance theories of planet and brown dwarf formations.

"The research builds upon Dr. Openheimer's past successes in the detection of a brown dwarf and several debris disks and take advantage of an improved, deformable, secondary mirror which was installed at the telescope facility in 2006," said NSF Program Manager Julian Christou. "The image produced speaks directly to the biggest, unresolved question of planet formation--how the thick disk of debris and gas evolves into a thin, dusty region with planets." Young stars generally have a lot of material caught in their gravitational pull--material that organizes itself into a disc over time. Astronomers believe planets form in this disc.

The image produced by Oppenheimer's team shows a horseshoe-shaped void in the disc with a bright point appearing as a dot in the void.

"The deficit of material could be due to a planet forming and sucking material onto it, coalescing into a small point in the image and clearing material in the immediate surroundings," Oppenheimer said. "It seems to be indicative of the formation of a small body, either a planet or a brown dwarf."

AB Aurigae is well-studied because it is young, between one and three million years old, and can therefore provide information on how stars and objects that orbit them form. One unresolved question about planet formation is how the initial thick, gas-rich disk of debris evolves into a thin, dusty region with planets. The observation of stars slightly older than AB Aurigae shows that at some point the gas is removed, but no one knows how this happens. AB Aurigae could be in an intermediate stage, where the gas is being cleared out from the center, leaving mainly dust behind.

"More detailed observations of this star can help solve questions about how some planets form, and can possibly test competing theories," says Oppenheimer. And if this object is a brown dwarf, our understanding of them must be revamped as brown dwarfs are not believed to form in circumstellar materials, Oppenheimer said.