Number of people working in S&E occupations up since 2003 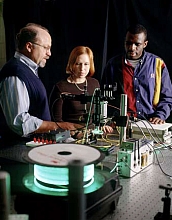 Science and engineering workforce availability in the United States is under serious scrutiny by observers who worry about a decline in the nation's ability to fill future demand. However, three newly published National Science Foundation (NSF) reports show increasing supplies of scientists and engineers, as well as a strong labor market.

According to NSF data, the number of individuals working in science and engineering (S&E) occupations grew by 4.3 percent, and their unemployment rate dropped to 2.5 percent in 2006, the lowest unemployment rate since the early 1990s.

Every two years NSF surveys and collects data on scientists and engineers, defined as people with a bachelor's degree or higher with science, engineering or related degrees or occupations.

"The NSF data tell one side of the story - the supply side, and do not reflect information about the future or current demand for scientists and engineers," says Nimmi Kannankutty, NSF program manager responsible for compiling the data. "On the supply side, we can say that the current S&E labor force is expanding, new graduates are coming out, and people are able to find employment, or are continuing their education."

Overall unemployment for scientists and engineers in the United States dropped to 2.5 percent in 2006. "The drop was consistent across all degree levels and almost all science and engineering occupations," notes Kannankutty.

Unemployment rates for the entire U.S. labor force in 2003 and 2006 were 6 percent and 4.7 percent respectively as compared with the 3.2 percent and 2.5 percent posted for scientists and engineers, maintaining the historical norm of lower unemployment rates than for the overall labor market.

These statistics reflect the labor market as of 2006, so are not representative of the current status of the S&E workforce.

A separate NSF report on new graduates also shows potential for a new influx of S&E workers. In 2006, there were 1.9 million new science, engineering and health graduates with degrees earned in academic years 2003 to 2005 in the United States. See http://www.nsf.gov/statistics/infbrief/nsf08304/.

Nearly all of these new graduates either entered the workforce or moved on to higher education. Women made up more than 50 percent of these new science, engineering and health graduates, but this varied by specific field.

The third NSF report on U.S. doctorates shows that 45 percent of those who have earned a doctoral degree in a science, engineering or health field from a U.S. university held a postdoctoral position at sometime in their careers. See http://www.nsf.gov/statistics/infbrief/nsf08307/.

"The academic sector remains the place where most postdocs are employed," says Kannankutty. "After completing the postdoc, many of these individuals continue their careers in the business/industry or government sectors."

More recent doctoral graduates report a higher rate of having held a postdoctoral position than those who graduated earlier.

"The main purpose of these three reports is to announce the availability of new data on the U.S. science and engineering workforce," says Kannankutty. "The data show there was a strong labor market for scientists and engineers in 2006."

NSF will field the next round of the SESTAT surveys of scientists and engineers in fall 2008.