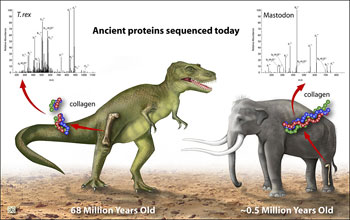 Genetic sequencing show link of T. rex with birds and mastadons with elephants.

Scientists have put more meat on the theory that dinosaurs' closest living relatives are modern-day birds.

Molecular analysis, or genetic sequencing, of a 68-million-year-old Tyrannosaurus rex protein from the dinosaur's femur confirms that T. rex shares a common ancestry with chickens, ostriches, and to a lesser extent, alligators.

The dinosaur protein was wrested from a fossil T. rex femur discovered in 2003 by paleontologist John Horner of the Museum of the Rockies; the bone was found in a fossil-rich stretch of land in Wyoming and Montana.

The new research results, published this week in the journal Science, represent the first use of molecular data to place a non-avian dinosaur in a phylogenetic tree, a "tree of life," that traces the evolution of species.

"These results match predictions made from skeletal anatomy, providing the first molecular evidence for the evolutionary relationships of a non-avian dinosaur," says Science paper co-author Chris Organ, a researcher at Harvard University. "Even though we only had six peptides--just 89 amino acids--from T. rex, we were able to establish these relationships."

"Tests of the peptide sequences in T. rex bone fossils have confirmed that newer methods of molecular systematics agree with more traditional methods of taxonomic classification based on morphology, or shapes," says Paul Filmer, program director in the National Science Foundation (NSF)'s Division of Earth Sciences, which funded the research.

Asara became involved in analysis of the collagen protein because of his expertise in mass spectrometry techniques capable of sequencing minute amounts of protein from human tumors.

"Most of the collagen sequence was obtained from protein and genome databases, but we also needed to sequence some critical organisms, including modern alligator and modern ostrich, by mass spectrometry," says Asara.

"We determined that T. rex, in fact, grouped with birds--ostrich and chicken--better than any other organism that we studied," he says. "We also showed that it groups better with birds than modern reptiles, such as alligators and green anole lizards."

While scientists have long suspected that birds, and not more basal reptiles, are dinosaurs' closest living relatives, for years that hypothesis rested largely on morphological similarities in bird and dinosaur skeletons.

The scientists also report that a similar analysis of 160,000- to 600,000-year-old collagen protein sequences derived from a mastodon bone establishes a close phylogenetic relationship between that extinct species and modern elephants.

Organ, Asara, Schweitzer and Cantley's co-authors on the current Science paper are Wenxia Zheng of NCSU and Lisa Freimark of BIDMC.

The research also was funded by the National Institutes of Health, the Paul F. Glenn Foundation and the David and Lucile Packard Foundation.