Rocks on and under seafloor offer feast for microbes 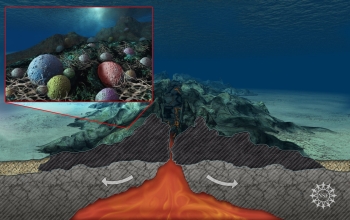 Seafloor bacteria on ocean-bottom rocks are more abundant and diverse than previously thought, appearing to "feed" on the planet's oceanic crust, according to results of a study reported in this week's issue of the journal Nature.

The findings pose intriguing questions about ocean chemistry and the co-evolution of Earth and life.

Once considered a barren plain dotted with hydrothermal vents, the seafloor's rocky regions appear to be teeming with microbial life, say scientists from the Woods Hole Oceanographic Institution (WHOI) in Woods Hole, Mass., University of Southern California (USC) in Los Angeles, and other institutions.

While seafloor microbes have been detected before, this is the first time they have been quantified. Using genetic analyses, Cara Santelli of WHOI, Katrina Edwards of USC, and colleagues found three to four times more bacteria living on exposed rock than in the waters above.

"Initial research predicted that life could in fact exist in such a cold, dark, rocky environment," said Santelli. "But we really didn't expect to find it thriving at the levels we observed."

Surprised by this diversity, the scientists tested more than one site and arrived at consistent results, making it likely, according to Santelli and Edwards, that rich microbial life extends across the ocean floor.

"This may represent the largest surface area on Earth for microbes to colonize," said Edwards.

"These scientists used modern molecular methods to quantify the microbial biomass and estimate the diversity of microbes in deep-sea environments," said David Garrison, director of the National Science Foundation (NSF)'s Biological Oceanography Program. NSF's Ridge 2000 program funded the research. "We now know that this remote region is teeming with microbes, more so than anyone had guessed."

Santelli and Edwards also found that the higher microbial diversity on ocean-bottom rocks compared favorably with other life-rich places in the oceans, such as hydrothermal vents.

These findings raise the question of where these bacteria find their energy, Santelli said.

"We scratched our heads about what was supporting this high level of growth," Edwards said.

With evidence that the oceanic crust supports more bacteria than overlying water, the scientists hypothesized that reactions with the rocks themselves might offer fuel for life.

In the lab, they calculated how much biomass could be supported by chemical reactions with the rocky basalt. They then compared this figure to the actual biomass measured. "It was completely consistent," Edwards said.

This discovery lends support to the idea that bacteria survive on energy from Earth's crust, a process that could add to our knowledge about the deep-sea carbon cycle and the evolution of life.

Many scientists believe that shallow water, not deep water, is better suited for cradling the planet's first life forms. Up until now, dark, carbon-poor ocean depths appeared to offer little energy, and rich environments like hydrothermal vents were thought to be relatively sparse.

But the newfound abundance of seafloor microbes makes it possible that early life thrived--and perhaps began--on the seafloor.

"If we can really nail down what's going on, there are significant implications," Edwards said. "I hope that people turn their heads and notice: there's life down there."

In addition to Santelli and Edwards, the paper's co-authors are: Beth Orcutt of USC; Erin Banning of WHOI; Wolfgang Bach of WHOI and Universität Bremen; Craig Moyer of Western Washington University; Mitchell Sogin of the Marine Biological Laboratory; and Hubert Staudigel of the Scripps Institution of Oceanography.

The research was also funded by the NASA Astrobiology Institute and Western Washington University.