Hold the Old Lace: Arsenic and Iron Material Is a Remarkable Superconductor 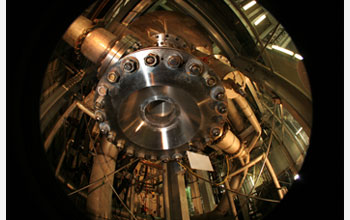 The 45-tesla hybrid magnet produces the highest field of any continuous field magnet in the world.

It may not be what Cary Grant had in mind when he uncovered his elderly aunts' recipe for doing away with lonely bachelors in the classic film, "Arsenic and Old Lace." But superconductors discovered a few months ago by scientists in Japan are displaying remarkable properties that present real mysteries to materials scientists.

The new class of materials that exhibit superconductivity at relatively high temperatures contain no copper-oxygen layers. Instead they have rather lace-like layers composed of arsenic and iron. A great flurry of activity to understand these new superconductors is underway.

Researchers at the National High Magnetic Field Laboratory (NHMFL), a facility established by the National Science Foundation in 1990, are using high magnetic fields to probe the properties of these materials, hoping to unlock the secret of their superconductivity.

Frank Hunte, a postdoctoral associate at the lab's Applied Superconductivity Center (ASC), working with David Larbalestier, Alex Gurevich, Jan Jaroszynski and colleagues in David Mandrus' group at Oak Ridge National Laboratory in Tennessee, discovered surprising magnetic properties in the new superconductors that suggest the materials may have very powerful applications--from improved MRI machines and research magnets to a new generation of superconducting electric motors, generators and power transmission lines. The research, detailed in the latest issue of the journal Nature, also adds to the long list of mysteries surrounding superconductivity. The researchers present evidence that the new materials, which scientists are calling "doped rare earth iron oxyarsenides," develop superconductivity in quite a new way.

One of the most fascinating phenomena in nature, superconductivity can be thought of as "frictionless" electricity. In conventional electricity, heat is generated by friction as electrons (electric charge carriers) collide with atoms and impurities in a wire. This heating effect is good for appliances such as toasters or irons, but not so good for most other applications that use electricity.

In some materials, a dramatic change takes place at very cold temperatures--electric current glides through the materials without dissipation. Powerful magnets that rely on this phenomenon of superconductivity enable Magnetic Resonance Imaging for medicine, and open new frontiers for scientific discovery at research centers such as the NHMFL.

< p>Though research on this substance is very much in its early stages, scientists are talking excitedly of "promise" and "potential." If scientists and engineers ever harness this phenomenon at or near room temperature in a practical way, untold billions could be saved on energy costs.

"What one would like is a greater selection of superconductors, operating at higher temperatures, being cheaper, possibly being more capable of being made into round wires," said Larbalestier, director of the ASC. "Iron and arsenic, both inherently cheap materials, are key constituents of this totally new class of superconductors. We're just fascinated. It's superconductivity in places you never thought of."