Training can increase fluid intelligence, once thought to be fixed at birth 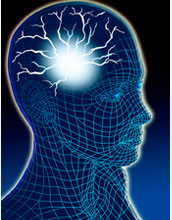 Training a person's working memory may increase his or her general intelligence.

Can human beings rev up their intelligence quotients, or are they stuck with IQs set by their genes at birth? Until recently, nature seemed to be the clear winner over nurture.

But new research, led by Swiss postdoctoral fellows Susanne M. Jaeggi and Martin Buschkuehl, working at the University of Michigan in Ann Arbor, suggests that at least one aspect of a person's IQ can be improved by training a certain type of memory.

Fluid intelligence, on the other hand, draws on the ability to understand relationships between various concepts, independent of any previous knowledge or skills, to solve new problems. The research shows that this part of intelligence can be improved through memory training.

"When it comes to improving intelligence, many researchers have thought it was not possible," says Jaeggi. "Our findings clearly show this is not the case. Our brain is more plastic than we might think."

Jaeggi, Buschkuehl and Walter Perrig from Bern University, Switzerland, along with Jon Jonides, their National Science Foundation-supported colleague from the University of Michigan, reasoned that just as crystallized intelligence relies on long-term memory, fluid intelligence relies on short-term memory, or "working memory," as it is more accurately called. This is the same type of memory people use to remember a phone number or an e-mail address for a short time, but beyond that, working memory refers to the ability to both manipulate and use information briefly stored in the mind in the face of distraction.

Researchers gathered four groups of volunteers and trained their working memories using a complex training task called "dual n-back training," which presented both auditory and visual cues that participants had to temporarily store and recall.

Participants received the training during a half hour session held once a day for either eight, 12, 17 or 19 days.  For each of these training periods, researchers tested participants' gains in fluid intelligence. They compared the results against those of control groups to be sure the volunteers actually improved their fluid intelligence, not merely their test-taking skills.

"Our findings clearly show that training on certain memory tasks transfer to fluid intelligence," says Jaeggi. "We also find that individuals with lower fluid intelligence scores at pre-test could profit from the training."

Researchers also surmise that this same type of memory training may help children with developmental problems and older adults who face memory decline. But, that remains to be seen, because the test results are based on assessments of young, healthy adult participants.

"Even though it currently appears very hard to improve these conditions, there might be some memory training related to intelligence that actually helps," says Jaeggi. "The saying 'use it or lose it' is probably appropriate here."