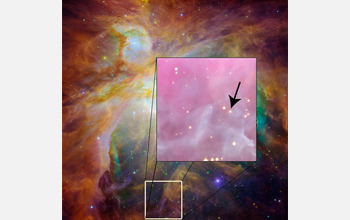 Twin stars observed in the Orion Nebula, 1,500 light years from the Earth.

Two stars, each with the same mass and in orbit around each other, are twins that one would expect to be identical. So astronomers were surprised when they discovered that twin stars in the Orion Nebula, a well-known stellar nursery 1,500 light years away, were not identical at all. In fact, these stars exhibited significant differences in brightness, surface temperature and possibly even size.

The study, which is published in the June 19 issue of the journal Nature, suggests that one of the stars formed significantly earlier than its twin. Because astrophysicists have assumed that binary stars form simultaneously, the discovery provides an important new challenge for today's star formation theories, forcing theorists to reexamine their models to see if the models can indeed produce binaries with stars that form at different times.

Because mass and age estimates for stars less than a few million years old are based on models that were calibrated with measurements of binary stars presumed to have formed simultaneously, this new discovery may cause astronomers to readjust their estimates for thousands of young stars.

The newly formed twin stars are about 1 million years old. With a full lifespan of about 50 billion years, that makes them equivalent to one-day-old human babies.

"The easiest way to explain the observed differences is if one star was fully formed about 500,000 years before its twin. That would be equivalent to a human birth-order difference of about half a day," said Keivan Stassun, associate professor of astronomy at Vanderbilt University.

Stassun and Robert D. Mathieu from the University of Wisconsin-Madison headed up the project, with significant funding from the National Science Foundation.