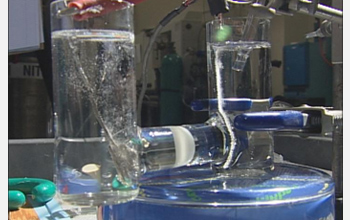 A snapshot showing the new, efficient oxygen catalyst in action in Dan Nocera's laboratory at MIT.

Because oxygen and hydrogen are energy-rich fuels, many researchers have proposed using solar electricity to split water into those elements--a stored energy source for when the sun goes down. One of the chief obstacles to that green-energy scenario has been the difficulty of producing oxygen without large amounts of energy or a high-maintenance environment.

Now, Massachusetts Institute of Technology chemist Daniel Nocera and his postdoctoral student Matthew Kanan have discovered an efficient way to solve the oxygen problem. They announced their findings July 31, 2008, online in the journal Science.

"The discovery has enormous implications for the large scale deployment of solar since it puts us on the doorstep of a cheap and easily manufactured storage mechanism," said Nocera. "The ease of implementation means that this discovery will have legs. I have great faith in my chemistry, materials science and engineering colleagues in the community to drive this discovery hard and hopefully their work, along with our continued studies will yield viable technologies within 10 years."

While a home-based energy source using this technique could be a decade away, the breakthrough is a major step forward.

"This study demonstrates how research is critical for driving American competitiveness in the global energy marketplace. By funding fundamental research in water and renewable energy, we are investing in both our economic and environmental futures," said Arden L. Bement, Jr., director of the National Science Foundation (NSF).

To produce oxygen, Nocera and Kanan added cobalt and phosphates to neutral water and then inserted a conductive-glass electrode. As soon as the researchers applied a current, a dark film began to form on the electrode from which tiny pockets of oxygen began to appear, eventually building into a stream of bubbles.

After analyzing the electrode, the researchers concluded that a cobalt-phosphate mixture, possibly combined with phosphate, had deposited as a film.

Nocera and Kanan believe the film is the catalyst that helps break apart the water molecules to create oxygen gas. The protons (hydrogen nuclei) released from the process pick up electrons and convert back into hydrogen at a partner electrode.

Nocera and Kanan also found evidence that the catalyst seems to refresh itself, a mechanism that would make maintenance of such oxygen-extracting systems far simpler than alternatives, although that finding needs confirmation from additional experiments.

"The simplicity of this process is amazing," said Luis Echegoyen, director of NSF's Chemistry Division. "Using common and affordable elements, and a glass of water, these chemists may have given us a future way to efficiently obtain oxygen by splitting water."

Despite the straightforward experimental setup, the exact mechanism driving the reactions is still unknown. For direct conversion of solar energy into hydrogen and oxygen, researchers will need to study the new research results and incorporate the mechanisms into a larger system that also cleanly produces hydrogen.

Nocera is a member of NSF's Powering the Planet, a partnership that NSF forged between MIT, Caltech and several other institutions as an NSF Chemical Bonding Center in 2005. In his role as a co-investigator with the center, Nocera has been pursuing sustainable energy technology through a broader effort to learn from, and apply, the lessons of photosynthesis and other natural processes.

"When we support fundamental research we never know where that investment will lead. In this instance, it may lead to new opportunities for sustainable energy," said Tony Chan, assistant director for NSF's Mathematics and Physical Sciences Directorate.