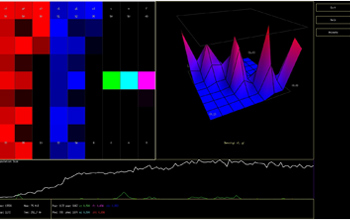 Anolis lizard diversity, shown in a simulation model's output, is among the center's subjects.

Biologists and mathematicians from around the world will take part in a new institute dedicated to bringing top researchers together to find creative solutions to pressing problems in both scientific fields.

Known as the National Institute for Mathematical and Biological Synthesis, or NIMBioS, the center is funded by a $16 million award from the National Science Foundation (NSF) and is located at the University of Tennessee (UT) Knoxville.

Mathematical biology is a growing field that applies the power of mathematics and modeling to the questions at multiple scales of space and time faced by biologists.

Whether developing better strategies to control the spread of invasive species or determining the best way to combat wildfires, the techniques allow researchers to take a larger, more systematic approach to finding the best possible solutions.

Other challenges NIMBioS scientists will address include fundamental science questions such as the way in which the components of cells work together to create a fully functional system, and developing new paradigms in mathematics.

A unique aspect of NIMBioS will be its partnership with the Great Smoky Mountains National Park. The park and its Twin Creeks Science Center will play a key role in the institute's work, with the park serving as a testing ground for many of the ideas that come from NIMBioS.

"We believe this center is poised to be a global hub for mathematical and biological research," said the institute's director, Louis Gross, a mathematician and ecologist at UT Knoxville. "By taking a unique approach to scientific collaboration across a variety of disciplines, NIMBioS will have an immediate impact."

"At the start of the 21st century, biologists will become increasingly quantitative and interdisciplinary," said Collins. "The new institute has a broad mandate to pursue excellence at the interface of the life sciences and mathematics. In fulfilling this mission, it complements previous and current efforts to stimulate quantitative thinking in biology while fostering interdisciplinary research and education. NIMBioS is an exciting addition to an increasing NSF portfolio at the interface of the life and physical sciences."

NIMBioS will bring together small groups of researchers from mathematics, biology and other fields to approach very specific issues that face the country.

In addition to small working groups, the institute will host larger gatherings on biological topics and on how to apply the tools of computational biology in general.

"The interface between the mathematical and physical sciences and the biological sciences represents an important strategic investment area for MPS [NSF's Directorate for Mathematical and Physical Sciences]," said Tony Chan, NSF assistant director for MPS. Chan noted that many divisions within MPS have a history of significant investments at this interface, and new programs continue to be developed and initiated.

Center scientists believe that more than 600 researchers each year will travel to Knoxville for working groups or conferences hosted by NIMBioS.

"We are proud to work with a great group of partners on this project," said Gross.

This grant follows on the heels of the NSF creation of the National Institute for Computational Sciences at UT Knoxville, a $65 million award to build and operate a supercomputer to assist scientists nationwide.

UT and Oak Ridge National Laboratory experts in high-performance computing will work with NIMBioS scientists to apply the power of supercomputing to the difficult questions NIMBioS will answer.