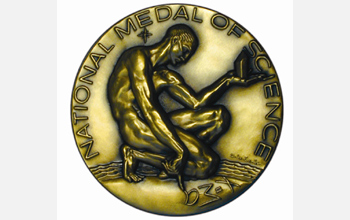 The National Medal of Science is the nation's highest honor for science and engineering.

President George W. Bush has named the recipients of the 2007 National Medal of Science, the nation's highest honor for science and engineering. Honorees will receive the medals at a White House ceremony on Sept. 29, 2008.

"The 2007 National Medal of Science laureates have contributed to American science with their superb research," said Arden L. Bement, Jr., director of the National Science Foundation (NSF). "Their legacies have impacted our lives in numerous ways, from developing new therapies for diseases such as cancer to contributing to the development of the Internet and wireless communications. Their accomplishments reflect the high significance of this award."

The National Medal of Science honors individuals in a variety of fields for pioneering scientific research that has led to a better understanding of the world around us as well as to innovations and technologies that give the United States its global economic edge.

The award was established by Congress in 1959 and is administered by NSF. For more information about the National Medal of Science visit http://www.nsf.gov/od/nms/medal.jsp

The 2007 National Medal of Technology and Innovation Laureates will also be honored in September. For more information on that award, please visit http://www.uspto.gov/web/offices/com/speeches/08-19-2008ir.htm