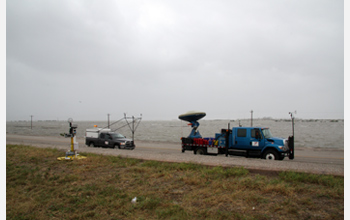 In the name of science, this mobile Doppler on Wheels braved Ike's hurricane winds last week.

The only scientific team to successfully brave Hurricane Ike's knock-down winds and swells in Galveston was the DOW, the Doppler on Wheels mobile weather radar operated by the Center for Severe Weather Research (CSWR) in Boulder, Colo.

"The DOW mission to Ike provided, for the first time, high-resolution radar data collected from the ground of the inside of a hurricane eye strengthening during landfall, and from a hurricane that directly impacted a large urban area," said scientist Josh Wurman of CWSR.

The National Science Foundation (NSF)-supported DOW was deployed on a 35-foot-high overpass in Galveston during the passage of Ike.

"The mission will allow researchers to better understand how phenomena called fine-scale wind streaks and boundary layer rolls, discovered by the the DOW in 1996, affect hurricane evolution," said Steve Nelson, program director in NSF's Division of Atmospheric Sciences, which funds the DOW. "These rolls may be important in how efficiently heat is extracted from the ocean, and how strongly hurricane winds are slowed by surface friction."

The DOW collected data for 17 hours. The center of Ike's eye passed nearly directly over the DOW, allowing scientists to take measurements of the front and rear eyewalls, and of the inside of the eye.

Deployed with the DOW were two vehicles equipped with instruments to track winds and raindrop size distributions, and ten unmanned "pods," which measured winds at locations so close to the water that human observers could not safely remain in the vicinity.

The vehicles were deployed at raised locations near the ends of the Galveston Causeway.

The pods stood watch in lines on the end of the Galveston Sea Wall and the Texas City Sea Wall, with 500-meter-spacing so the passage of small-scale gusts could be measured.

The DOW observed several mesovortices--swirling winds--in Ike's eyewall, which intensified winds and rainfall as these mesovortices rotated around the eye.

"The mesovortices are likely associated with some of the worst localized wind damage caused by Ike," said Wurman.