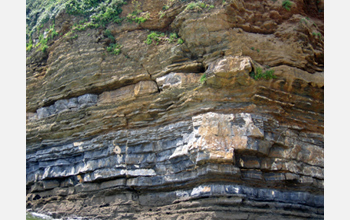 As the world looks for more energy, the oil industry will need more refined tools for discoveries in places where searches have never before taken place, geologists say.

"The new Paleozoic sea-level sediment curve provides a way of deriving predictive models of sediment migration on continental margins and in interior seaways," said Bilal Haq, lead author of the Science paper and a marine geologist at the National Science Foundation (NSF). The paper's co-author is geologist Stephen Schutter of Murphy Oil International in Houston, Tx.

"The sediment curve is of interest to industry, and also to scientists in academia," said Haq, "as the rise and fall of sea-level form the basis for intepretations of Earth history based on stratigraphy."

Through stratigraphy, the study of rock layering (stratification), scientists can derive a sequence of time and events in a particular region. Recent advances in the field of stratigraphy, including better time-scales for when sediments were deposited, and availability of data on a worldwide basis, are allowing scientists to reconstruct sea level during the Paleozoic.

The rises and falls of sea level during this period form the basis of stratigraphic interpretations of geology not only in the sea, but on land. These sea level increases and decreases are used extensively, Haq said, in predictive models of sediment movements.

The current Science paper is a shorter version of the results of a global synthesis of Paleozoic stratigraphy on which the authors have worked for many years.

"We hope that the publication of a sediment curve for this entire era will enhance interest in Paleozoic geology," said Haq, "and help the exploration industry in its efforts to look at older and deeper sediments."