Details of Evolutionary Transition from Fish to Land Animals Revealed 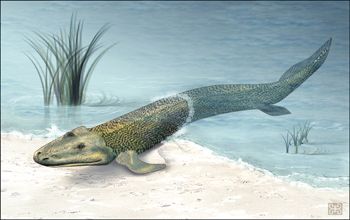 Fossil fish bridges the evolutionary gap between animals of land and sea.

New research has provided the first detailed look at the internal head skeleton of Tiktaalik roseae, the 375-million-year-old fossil animal that represents an important intermediate step in the evolutionary transition from fish to animals that walked on land.

Results of the study, published in this week's issue of the journal Nature, show that the transition from aquatic to terrestrial lifestyle involved complex changes not only to appendages (fins to limbs) but also to the internal head skeleton.

"Exquisite specimens of Tiktaalik roseae discovered several years ago continue to function as rosetta stones for understanding the emergence of quadripeds on land," said H. Richard Lane, program director in the National Science Foundation (NSF)'s Division of Earth Sciences, which funded the research.

A team co-led by scientist Ted Daeschler at the Academy of Natural Sciences in Philadelphia discovered Tiktaalik roseae (tik-TAHL-ik RO-zay) in 2004, in Devonian-age rock on Ellesmere Island in Canada, more than 700 miles above the Arctic Circle.

The creature was a large aquatic predator with a flattened head and body.

The body plan and nature of the deposits where the fossils were found suggest an animal that lived on the bottom in shallow water, and perhaps out of the water for short periods.

Tiktaalik roseae has features of the skull, neck, ribs and appendages that are shared with the earliest limbed animals (tetrapods), as well as fishlike features such as scales and fin rays. This mosaic of features makes it a textbook example of a transitional fossil, say paleontologists.

Jason Downs, a scientist at the Academy of Natural Sciences and lead author of this week's paper, said the examination of the internal head skeleton further demonstrates the intermediacy of Tiktaalik roseae.

"The braincase, palate and gill arches of Tiktaalik help reveal the pattern of evolutionary change in this part of the skeleton," said Downs. "We see that cranial features once associated with land-living animals were in fact the first adaptations for life in shallow water."

"The gradual evolutionary transition from fish to tetrapod, and the transition from aquatic to terrestrial lifestyles required much more than the evolution of limbs," said Daeschler. "The head of these animals was becoming more solidly constructed and, at the same time, more mobile with respect to the body across this transition."

"We used to think of this transition of the neck and skull as a rapid event, largely because we lacked information about the intermediate animals," said Neil Shubin of the University of Chicago, who co-led the team that discovered Tiktaalik roseae. "Tiktaalik neatly fills this morphological gap, and helps to resolve the timing of this complex transition."

During this transition, interactions among the different parts of the head skeleton also were changing.

"Fish in deep water move and feed in three-dimensional space, and can easily orient their bodies in the direction of their prey," said Farish Jenkins, Jr., an evolutionary biologist at Harvard University and co-author of the paper. "A mobile neck is advantageous in settings where the body is relatively fixed, as is the case in shallow water and on land."

It took more than a year for fossil preparators C. Frederick Mullison, of The Academy in Philadelphia, and Bob Masek, of the University of Chicago, to expose and preserve the delicate details in the fossil head skeleton.

The public can see a cast and a reconstruction of Tiktaalik roseae on permanent display in The Academy's museum.

The fossil research in Nunavut is carried out with authorization from the Department of Culture, Language, Elders and Youth, Government of Nunavut. All fossils are the property of the people of Nunavut and will be returned to Canada after they are studied.

In addition to NSF, the research was supported by private donors, the Academy of Natural Sciences, the Putnam Expeditionary Fund (Harvard University), the University of Chicago and the National Geographic Society.