As Sticky as a Gecko ... but Ten Times Stronger! 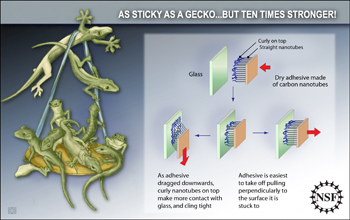 A gecko hangs off a ledge holding nine more geckos, demonstrating the power of a new adhesive.

The gecko's amazing ability to stick to surfaces and walk up walls has inspired many researchers to manufacture materials that mimic the special surface of a gecko's foot. The secret behind the gecko's ability to stick so well is a forest of pillars at the micro-/nano-scale on the underside of the gecko's foot. Because there are so many pillars so close together, they are held tightly to the surface the gecko is walking on by a molecular force called the Van der Waals force. This relatively weak force causes uncharged molecules to attract each other.

In an unprecedented feat, Liming Dai, at the University of Dayton, and colleagues report in the October 10th issue of Science successful construction of a gecko-inspired adhesive that is ten times stronger than a gecko, at about 100 newtons per square centimeter.

The researchers constructed their adhesive out of two slightly different layers of multi-walled carbon nanotubes. The lower layer is composed of vertically-aligned carbon nanotubes, while the upper segment--which comes into contact with the surface it is sticking to--is curly, like a mess of spaghetti.

As shown in the figure, the adhesive sticks best when it is pulled down parallel to the surface it is sticking to--this is called shear adhesion. This action arranges the tips of the curly nanotubes so they have maximum contact with the substrate, thereby maximizing the Van der Waals force. Pulling the adhesive off in a motion perpendicular to the substrate is much easier--at this angle the sticking force is ten times weaker.

In this way, the adhesive has strong shear adhesion for firm attachment and relatively weak adhesion for detachment perpendicularly to the substrate. Just like a gecko, the adhesive can stick to a wall when needed, and then lift off easily to take the next step. This breakthrough, supported by the National Science Foundation, will have many technological applications.