A fertilizer and herbicide are partly to blame 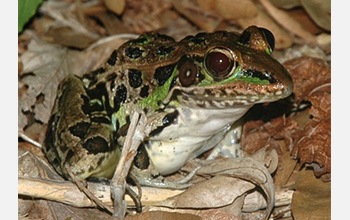 Amphibians around the world are on the decline from disease. In an article in this week's issue of the journal Nature, Jason Rohr of the University of South Florida (USF) and colleagues revealed that chemical pollution can increase often deadly trematode (parasitic flatworm) infections in the northern leopard frog, a declining amphibian species.

"The combination of atrazine, a widely used herbicide, and phosphate, a primary ingredient in fertilizers, accounted for 74 percent of the variation in larval trematode abundance in the frogs," said Rohr. "These agrochemicals increase trematode infections by augmenting snail intermediate hosts--the source of trematodes that infect amphibians--and suppressing amphibian immune responses." The research was funded by National Science Foundation (NSF) and U.S. Department of Agriculture grants.

According to Rohr, identifying the main risk factors and predictors for disease in amphibians is important.  This study showed that atrazine and phosphate concentrations in the Minnesota wetlands they investigated were the best of over 240 plausible predictors of trematode abundance in frogs. In a manipulative experiment conducted in outdoor, 300 gallon tanks, Rohr and colleagues verified that atrazine increased snail abundance, caused amphibian immuno-suppression, and elevated amphibian trematode loads.

Like canaries used to gauge the safety of air in coal mines, amphibians are thought to be the "canaries" in our freshwater environments; reductions in their health can warn of subsequent species declines and degradation of ecosystem services.

"Atrazine and fertilizers might not be the only chemicals affecting disease risk," says Rohr. "Many chemicals can be immuno-suppressive, and standard toxicity tests used to register chemicals in the United States and Europe are conducted on isolated individuals, ignoring interactions with other species, such as their parasites. Thus, our findings are likely the tip of the iceberg for pollution-induced disease emergence in both humans and wildlife."

"The spread of infectious disease and loss of biodiversity are each a serious challenge to scientists seeking a fundamental understanding of ecological systems, and to policy makers charged with protecting the environment," said Alan Tessier, an NSF program director. "Rohr and his colleagues demonstrate how both of these phenomena are linked to the widespread use of a common agrochemical in the case of a declining amphibians species. This work illustrates how predicting anthropogenic impacts requires a fundamental understanding of the complexity of species interactions embedded within food webs."