Statement by Karl A. Erb, Director of NSF's Office of Polar Programs, on the Death of Martin A. Pomerantz 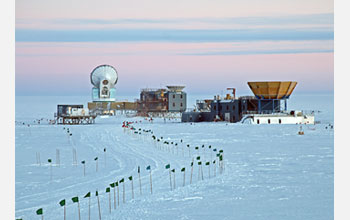 The Martin A. Pomerantz Observatory (MAPO) on the right of the photograph.

On behalf of the National Science Foundation and as the head of the U.S. Antarctic Program, I wish to express our sadness at the news of the recent passing of Martin A. Pomerantz, who died on October 25, at his northern California home at the age of 91.

Although few people truly achieve such status in their lifetimes, Dr. Pomerantz was literally a legend in Antarctic science for his vision and dedication to the field of astronomy, specifically in making the South Pole a pivotal location for cutting-edge astrophysical observations.

Those who knew Martin described him as an extraordinarily gifted scientist with an incredible breadth of talents. Almost singlehandedly, he recognized the value of one of the world's most remote and inhospitable places as an ideal place to study the physical origin of the Universe and other complex astrophysical phenomena. Then he set out, successfully, to convince others of the validity of his arguments.

Martin carried out decades of cosmic-ray research in Antarctica as well as solar seismology, submillimeter astronomy and Cosmic Microwave Background Radiation cosmological measurements, all at the South Pole.

His list of awards and other honors is very long, but for the work he did with NSF, and mostly under the auspices of the U.S. Antarctic Program, he was awarded NSF's Distinguished Public Service Award in 1987.

Among his other honors, an observatory building at NSF's Amundsen-Scott South Pole Station was dedicated in 1995 as the Martin A. Pomerantz Observatory. It is universally and affectionately referred to as "MAPO," (may-poh) by the South Pole community.

His life and connections with Antarctica spanned an incredible period of history. In his book, ‘Astronomy on Ice - Observing the Universe from the South Pole", he describes his fascination with Antarctica as beginning with a parade in 1930 honoring Adm. Richard E. Byrd's return from the first flight over the South Pole.

Dr. Pomerantz lived to see many significant discoveries made with telescopes associated with the facility that bears his name. He also lived to see the completion of the massive South Pole Telescope in early 2007 not far from where his own initial and significant experiments were carried out.

He led quite a life and he leaves quite a scientific legacy.