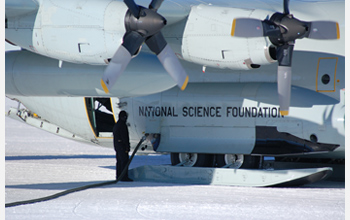 A complicated international air operation coordinated by the U.S. Antarctic Program, which is managed by the National Science Foundation (NSF), has successfully evacuated a badly injured employee of the Australian Antarctic Division from Antarctica to a hospital in Hobart, Tasmania.

The patient arrived in Tasmania just before midnight local time on Nov. 5, after a roughly 10-hour flight from Australia's Davis Station. The patient suffered multiple fractures during an all-terrain vehicle accident on Oct. 20, while on a field trip at Trajer Ridge, around 25 kilometers (15.5 miles) from Davis Station, where he had spent almost the past 12 months as the station's chef.

The turbo-prop Hercules picked up the injured person, who Australian authorities described as in "serious but stable" condition, for the flight to Tasmania. The "Herc" was flown by the 109th Airlift Wing of the New York Air National Guard, based at Stratton Air National Guard Base in New York State. It is assigned to the U.S. Air Force's 13th Air Expeditionary Group.

The medical team, along with aircrew members and an aircraft maintenance team, spent the night at Davis Station in order to rest, allow the aircraft to re-fuel and to help prepare the patient before beginning the flight to Hobart.

The aircraft landed on a temporary runway at Davis that had been prepared by station personnel over the past week. The sea-ice runway is 3,000 meters (9,800 feet) long on ice 1.8 meters (six feet) thick. Certifying that the runway was capable of safely handling the aircraft--which weighs roughly 68,000 kilograms (150,000 pounds) fully fueled--required extensive collaboration among NSF, the U.S. Air Force and the Australian Antarctic Division.

The successful mission also relied on the NSF-funded Antarctic Mesoscale Prediction System (AMPS) to forecast weather on the massive Antarctic continent, which is the size of the U.S. and Mexico combined. AMPS weather forecasts are used routinely by the U.S. Antarctic Program, but are vital in planning complex air operations such as the medical evacuation flight.

AMPS is collaborative project of the National Center for Atmospheric Research (NCAR), the Byrd Polar Research Center at Ohio State University and the University of Colorado.

The landing at Davis Station was a first for the Guard and the successful operation was a tribute to their skills and to those who made sure that the unusual landing could be made safely, said Karl A. Erb, who heads the U.S. Antarctic Program.

"I commend the aircrew and all the personnel, both military and civilian, who insured this safe and successful flight under these difficult and unfamiliar conditions," he added.

After careful consideration of the options for safeguarding the patient's health, AAD had formally requested assistance from the U.S. Antarctic Program in October.

Erb noted that while the medical mission was possibly unique in the history of exploration of Antarctica due to the many unknowns involved, the cooperation among nations who maintain a scientific presence there was not.

"We, all of us, recognize that even in the days of routine flights and the ability to supply most of life's creature comforts at the bottom of the world that prying scientific secrets from this beautiful but hazardous place is not without risk," he said. "Each national program stands ready to help any other whenever possible in cases like this. I speak for all of us in the U.S. Antarctic Program when I say that we are glad to be able to make a contribution, both to the individual's safety, and to the collective good."

NSF manages the U.S. Antarctic Program, through which it supports and coordinates all U.S. scientific research in Antarctica. A fleet of LC-130's--which can land on snow or ice surfaces throughout Antarctica thanks to their ski-equipped landing gear or on wheels as necessary--is used to supply science deep-field parties and to maintain an "air bridge" between McMurdo and Amundsen-Scott South Pole stations.

Tony Press, the director of the Australian Antarctic Division, said he was very grateful for the support provided by NSF.

"It has enabled a quicker and more stable evacuation option than Australia's research and resupply ship Aurora Australis which has now reached Davis after being diverted from Casey station soon after the incident occurred," he said. "The ship's progress to Davis over the past week has been slowed by bad weather and heavy sea-ice so today's air evacuation is a very welcome and much speedier option."

He added that "it's a tribute to our excellent relationship with the U.S. Antarctic Program and a fantastic example of the collaboration that typifies Antarctic operations."