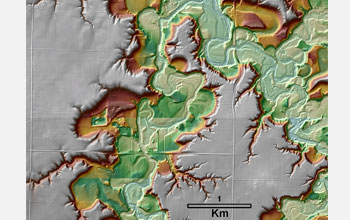 The National Science Foundation (NSF) supports scientific studies in the geosciences and related fields highlighted at the fall meeting of the American Geophysical Union (AGU) in San Francisco, Calif., Dec. 15-19, 2008.

Geosciences at the NSF: Opportunities, approaches, partnerships, and plans

NSF's Geosciences Directorate (GEO) has worked with community leaders over the past year to develop and refine a strategic vision for the next decade. "GEO's three divisions--Atmospheric Sciences, Earth Sciences, and Ocean Sciences--along with a complement of education and outreach programs, map extremely well into the scientific and educational interests of AGU's membership," said Tim Killeen, NSF Assistant Director for Geosciences. "NSF/GEO plays a special role for the AGU community through its long-term commitment to many programs that support basic disciplinary and interdisciplinary research and education in the geosciences." GEO also plays a leading role in the development of strong inter-agency, intra-agency, and international partnerships that further support geosciences research, said Killeen. During the next ten years, significant new facilities and capabilities will transform the field. Killeen's presentation will highlight the opportunities ahead, and will place GEO in the context of exciting ongoing research and important demographic and other trends.

Linking geomorphology and ecology: From wetlands to drylands, important links

Understanding landscapes requires reaching across traditional disciplinary boundaries, geoscientists have found. For example, it's known that riparian vegetation significantly impacts river flow, sedimentation, erosion and channel development in complex ways. An integrated approach to research that combines ecological and geomorphological principles has not yet been adopted. Work is needed to clarify the role of ecological and geomorphological processes in controlling how a system acts and reacts. This session brings together researchers in ecology and geomorphology to explore different processes and interactions in these fields.

Presentations will address such topics as: how aquatic vegetation affects sediment transport; the evolution of tidal river systems and the influence of biotic and abiotic components; arid regions and how they are influenced by growth of plant life; rapid vegetation shifts and their impacts on land degradation at the margins of deserts; and hydroecological feedbacks in the Everglades and similar floodplains.

Many of the presenters are affiliated with NSF's National Center for Earth-surface Dynamics (NCED) in St. Paul, Minn.

Atlantic salmon require swift-flowing, gravel-bed rivers for spawning and rearing their young. The suitability for salmon of these rivers in coastal New England and Atlantic Canada is strongly influenced by glacial and land-use history. Scientists are using GIS-based measurements to investigate relationships between channel processes and habitat characteristics. The results offer a new way of prioritizing stream restoration efforts such as removal of small dams or additions of large woody debris by identifying river reaches with high-quality habitat. The near-extirpation of Atlantic salmon from U.S. rivers is motivating restoration efforts, including the removal of barriers to migration and in-stream habitat restoration projects.

Waterfall erosion leads to formation of amphitheater-based canyons on Earth, and Mars

Networks of valleys with amphitheater-shaped headwalls are prominent features on the surface of Mars and on Earth. Scientists have now found evidence that Box Canyon, Idaho, one of our planet's best such examples, was carved during large-scale flooding some 45,000 years ago. Such evidence includes large boulders, "plunge pools" at the bases of waterfalls, and scoured rocks along the rim of the canyon headwall.

Rock toppling by waterfalls, in particular, can result in formation of amphitheaters like Box Canyon. At a waterfall, rock is affected first by overflowing water, then by the plunge pool at the waterfall's foot, and finally by gravity. Geologists have developed a model for this process that may explain the origin of steep headwalls in volcanic terrains on Earth and Mars where waterfalls occur.

Remotely Sensed Land Surface Parameter Field Experiments: Past, Present, and Future Over the past few decades, large-scale hydrologic-atmospheric-remote sensing field experiments have taken place around the globe. For example, the Boreal Ecosystem-Atmosphere Study (BOREAS) is an experiment in the northern boreal forests of Canada. Its goal is to improve our understanding of the boreal forests--how they interact with the atmosphere, how much carbon dioxide they can store, and how climate change will affect them.

Research results from many large-scale field experiments are still being reported 20 years after their field campaigns. A poster session and oral session present a forum for discussion of the results of these projects, and an opportunity to review large-scale projects currently in planning stages. Participants from the international community will share their experiences with those planning future projects.

Dam removal has been viewed as an important river restoration strategy and scientific opportunity, researchers say, because it's a real-time, full-scale field experiment on how a river responds once a dam is removed. The largest instantaneous and uncontrolled release of sediment accompanying a dam removal occurred with the removal of the Marmot Dam on the Sandy River in Oregon in October, 2007. Marmot Dam was a 14-meter-high, 50-meter-wide dam built in 1913 as part of a hydroelectric project. At the time of the dam's removal, the reservoir upstream was completely filled with sand and gravel.

Scientists from several agencies, including NSF's National Center for Earth-surface Dynamics (NCED), conducted pre-, during, and post-event monitoring of the dam removal and the Sandy River's response. Scientists will present results of their analyses of sediment transport and geomorphic change applicable to future dam removals.

In the removal of Oregon's Marmot Dam, stakeholder groups unanimously agreed on what has been called the "blow-and-go" method of removing the dam. The method resulted in a large amount of sediment released into a major salmon-bearing river in the Columbia River basin. Scientists will present pre-dam sediment transport modeling predictions, and compare them with post-removal observations.

Who knows what soil lurks in the hearts of fens? "Sediment fingerprinting" may hold the answer.

Suspended sediment and resulting turbidity in rivers and streams are now common targets in Clean Water Act lawsuits. Even coarse sand and gravel beds, and places called fens, "get ticketed." A fen is a type of wetland fed by surface water and/or groundwater. Fens are characterized by their water chemistry, which is neutral or alkaline (basic), the "opposite" of bogs, which are acidic.

Advances in monitoring and modeling place scientists on the cusp of predicting sediment transport on a watershed scale, whether in fen or bog, stream or river. Challenges and opportunities facing the development of predictive sediment "budgets" for the Le Sueur River watershed, an agricultural area in southern Minn., will be discussed.

Press conferences take place in the AGU Press Conference Room (Moscone Center Room 3015), which is on Level 3, directly above the Press Room. Times for press conferences are Pacific Standard Time (PST). Session numbers at the end of each press conference listing may show only the first in a series of related sessions on the topic.

As the need to prepare for climate change becomes more pressing, scientists are advising local and regional leaders on adapting to a warmer future. Cities and states face an array of challenges, ranging from more frequent heat waves and droughts to higher costs for road maintenance, electricity, emergency services, and reliable water supplies. However, they have not taken a consistent approach to adapting to climate change. While some cities, such as Chicago, are mapping out their climate future, others lag far behind.

Antarctica: Back to the future

By investigating Antarctica's deep past, researchers are providing deeper understanding of the region today, including possible future scenarios for Antarctica's vast ice sheets. Drillers find that 1 to 14 million years ago, the West Antarctic ice sheet responded dramatically, at times, to global warming events, implying the possibility of rapid sea level fluctuations in our modern era, up to as much as a 6.4 meter (21 feet) rise. A new analysis of GPS and other data indicates that current models for vertical motion of Antarctic bedrock due to glacial rebound are incorrect, possibly leading to more accurate estimates of polar-ice-sheet contributions to sea level change. Evidence for ancient periods of movement or lack thereof between East and West Antarctica offers potential new insights into plate tectonics, volcanism, and convection in the Earth's mantle. These studies are part of the International Polar Year--a scientific research campaign focused on the Arctic and Antarctic, which is slated to end in early 2009.

Deccan volcanism and the dinosaur extinction

New paleontological data from India challenges the prevailing theory that the large Chicxulub meteorite impact in Yucatan, Mexico caused the mass extinction that wiped out the dinosaurs, among many other species. The data show that the K-T extinction coincided with the end of a major volcanism event in India. The volcanic outpouring spewed at least 30 times more sulfur dioxide, the suspected killing agent, than did the Chicxulub impact. In Mexico and Texas, melt rock spherules discovered in sediments well below the K-T boundary indicate that the Chicxulub impact predates the mass extinction by about 300,000 years, leaving no significant biotic effects.

Arctic in flux: New insights from the International Polar Year

Continuing climate changes in the Arctic received renewed scientific attention during the International Polar Year (IPY) -- a scientific research campaign focused on the Arctic and Antarctic, which is slated to end in early 2009. This briefing presents early results from a range of Arctic studies conducted during IPY based on climate models and new observations taken from sea, land, and space. Findings include the discovery of new seeps of the greenhouse gas methane along the East Siberian Arctic Shelf, large increases in tundra greenness along North America's Arctic coasts, a lengthening snowmelt season and a second year of ice mass loss in Greenland, and evidence that the predicted amplification of Arctic warming due to decreasing sea ice has already begun.

New studies reveal that two large leaks often form in the magnetic field that shields our planet from severe space weather. Researchers will discuss findings indicating where, how, and why this breach of the shield occurs. The discovery of the breach and its cause overturns established thinking about how most solar particles penetrate Earth's magnetic field. The findings are expected to aid scientists in predicting when solar storms will be severe. Based on these results, space-weather specialists expect fiercer storms during the upcoming solar cycle. Data from NASA's THEMIS fleet of spacecraft (Time History of Events and Macroscale Interactions during Substorms) were used to discover the size of the leak.

Urban areas have only recently been highlighted as important components in global change science. While the spatial extent of cities is a very small fraction of the Earth surface, the panelists argue that cities may play a pivotal role in mitigation and adaptation efforts. The session will also highlight the opportunities for carbon storage and sequestration in urban areas.