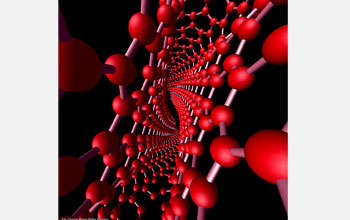 Federal entities are looking into safety and public acceptance issues surrounding nanotechnology because of its ability to alter matter on an atomic and molecular scale. The potential societal benefits of using nanotechnology to create new materials and devices for medicine, electronics and energy production could be huge. But the idea of creating them through molecular manipulation leaves some people apprehensive.

"Evidence shows that there is much room for improvement in efforts to communicate about the environmental, health, and safety impacts of nanotechnology," said Robert E. O'Connor, NSF program manager for decision, risk and management sciences.

The Yale study, part of their Cultural Cognition Project, surveyed 1,500 Americans, the majority of whom were unfamiliar with nanotechnology. Researchers gave participants balanced information about its risks and benefits. Upon seeing it, study participants became highly divided on the technology's safety compared to a group that was not shown the same information.

According to Dan Kahan, the Elizabeth K. Dollard Professor at Yale Law School and lead author of the study, people's cultural values determined how they responded. "People who had more individualistic, pro-commerce values, tended to infer that nanotechnology is safe," said Kahan. People more worried about economic inequality saw the same information as implying that nanotechnology is likely to be dangerous.

The finding is consistent with other Cultural Cognition Project studies that show people's cultural values influence their perceptions of environmental and technological risks. Kahan notes, "When respondents learned about this new technology, they matched their views of its risks with previously held cultural values."

A separate study conducted in the United States and Europe indicates that people with religious views see nanotechnology as less morally acceptable, compared with people who live in more secular societies.

According to the study, the United States and a few European countries where religion plays a larger role, notably Italy, Austria and Ireland see the potential of nanotechnology to alter living organisms or inspire synthetic life as less morally acceptable. In more secular European societies such as France and Germany, people are less likely to see nanotechnology as morally suspect.

"What we captured is nano-specific," said Dietram Scheufele, University of Wisconsin-Madison professor of life sciences communication. "But it is also representative of a larger attitude toward science and technology. It raises a big question about what's really going on in our public discourse where science and religion often clash."

"Our findings show that the public no longer just turns to scientists for answers about the science, but also for answers about its social implications," he said. "In other words, they want to know not only what can be done, but also what should be done. The more prepared scientists are to answer both questions, the more credible their societal leadership will be on issues like nanotechnology," said Scheufele, who co-authored the study with Elizabeth Corley, School of Public Affairs at Arizona State.

According to O'Connor, both studies highlight the need for specific public education strategies that consider citizens' values and predispositions. "Understanding that people make decisions about technology through the prisms of their personal values will be important to take into account if we are to accurately communicate the risks and benefits of innovations like nanotechnology to the public," said O'Connor.

It's estimated that nanotechnology will be a $3.1 trillion global industry by 2015. Both studies can be found in the Dec. 7, 2008, issue of the journal Nature Nanotechnology.