Iron on its Route to the Sea-Floor: A New Path

"Dust" from iron can float up from hydrothermal vents 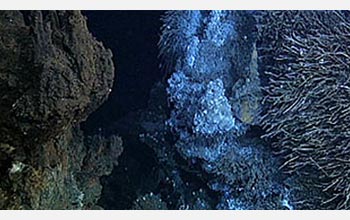 Iron spewed from hydrothermal vents and carried away by seawater does not rust.

Iron dust, the rarest nutrient for most marine life, can be washed down by rivers or blown out to sea or--a surprising new study finds--float up from the sea floor in the material spewed from hydrothermal vents.

The discovery, published online Feb. 8, 2009, in a paper in the journal Nature Geoscience, connects life at the surface to events occurring at extreme depths and pressures. The two worlds were long assumed to have little interaction.

A team from the University of Minnesota, University of Southern California, Woods Hole Oceanographic Institution and Lawrence Berkeley National Laboratory took samples from the East Pacific Rise, a volcanic mid-ocean ridge. The group found that organic compounds capture some iron from hydrothermal vents, enabling it to be carried away in seawater, according to scientist Brandy Toner of the University of Minnesota, lead author of the Nature Geoscience paper. Iron trapped in this way does not rust. For the scientists, discovering shiny iron in the ocean was like fishing a dry sponge out of a bath.

"Everything we know about the chemical properties of iron tells us that it should be oxidized; it should be rusted," said Katrina Edwards of USC.

The metal's purity has practical value. Aquatic organisms metabolize pure iron much more easily than its rusted form, Edwards said. How much captured iron floats into surface waters remains unknown. But any that does would nourish ocean life more efficiently than the oxidized iron from regular sources.

"A major question involves the importance of bacteria-catalyzed oxidation versus the conventional rusting process," said Don Rice, director of the National Science Foundation (NSF)'s Chemical Oceanography Program, which funded the research. "How much of the world's iron is deposited with bacterial help? And how much escapes both bacteria and the natural oxidation process?"

The sea floor may hold the answer.

Some marine scientists have called for iron fertilization because of the metal's crucial place in the aquatic food chain. Iron is the limiting nutrient in most parts of the oceans, meaning that its scarcity is the only thing standing in the way of faster growth. Iron's equivalent on land is nitrogen. Crop yields rose dramatically during the 20th century in part because of increased nitrogen fertilization. The expedition team discovered the phenomenon of iron capture serendipitously. Edwards and collaborators were studying deep-sea bacteria that catalyze the iron rusting reaction. Of the possible reactions that support microbial communities on rocks, iron oxidation is one of the most important, Edwards explained. Unfortunately, she added, "it's probably the least well understood major metabolic pathway in the microbial world."

The bacteria involved do not grow well in culture, so the researchers are using a range of molecular techniques to search for genes related to iron oxidation. The samples were collected continuously using a remote sampling device deployed and retrieved from the research vessel Atlantis between May 16 and June 27, 2006.

The other team members are Steven Manganini, Cara Santelli, Olivier Rouxel and Christopher German of the Woods Hole Oceanographic Institution; James Moffett of USC; and Sirine Fakra and Matthew Marcus of the Advanced Light Source at the Lawrence Berkeley National Laboratory.

The research also was supported by NASA and the Department of Energy.