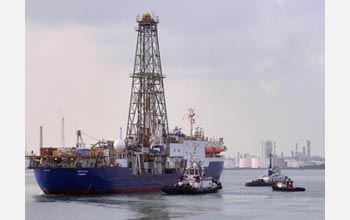 The JOIDES Resolution will sail in the Pacific on its first expedition since it was refurbished.

In early March, an international team of scientists will set sail aboard the drill ship JOIDES Resolution on the first of two Integrated Ocean Drilling Program (IODP) expeditions to the equatorial Pacific Ocean.

The second expedition will follow immediately afterward in May. Both are grouped into one science program, known as the Pacific Equatorial Age Transect (PEAT).

The results will lead to a clearer understanding of Earth's climate over the past 55 million years--a vital component to knowing what future course the planet's climate will take, scientists believe.

"These expeditions focused on climate change come at a critical time," said Julie Morris, director of the National Science Foundation (NSF)'s Division of Ocean Sciences, which supports IODP. "During the next year, sea-floor drilling related to climate change will happen from pole to pole."

The PEAT expeditions aim to recover a continuous Cenozoic record (from 65.5 million years ago to the present) of sediments beneath the equatorial Pacific Ocean. Geologists will drill into the crust on the Pacific tectonic plate along the equator.

Earlier scientific ocean drilling expeditions to the equatorial Pacific yielded discoveries about past climate conditions and the past position of the Pacific tectonic plate relative to the equator.

However, they did not obtain continuous sediment records the two PEAT expeditions will recover seafloor sediment cores with an unbroken record.

"The cores will help us understand how and why productivity in the Pacific changed over time," said Morris, "and provide information about rapid biological evolution and turnover during times of climatic stress."

The equatorial Pacific is a major center of solar warming, a region of high productivity, and a primary region for carbon dioxide exchange from the deep ocean to the atmosphere.

Over the last 55 million years, global climate has varied dramatically from extreme warmth to glacial cold. These climate variations have been imprinted on the biogenic-rich sediments that accumulated in the equatorial zone.

Information from the PEAT expeditions will help scientists understand how Earth was able to maintain very warm climates relative to the 20th century, even though solar radiation received at the earth's surface has remained nearly constant for the last 55 million years.