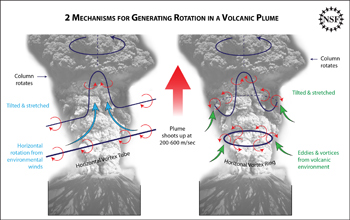 Two mechanisms for generating rotation in a volcanic plume.

A 200-year-old report by a sea captain and photographs of the 2008 eruption of Mount Chaiten are helping scientists better understand strong volcanic plumes.

In a paper published this week in the journal Nature, the scientists show that the spontaneous formation of a "volcanic mesocyclone"--a rotating, column-shaped vortex--causes the volcanic plume to rotate on its axis.

The rotation, in turn, triggers a sheath of lightning and creates waterspouts or dust devils. The origins of these volcanic phenomena were previously unexplained.

"These results solve a long-standing mystery about the relationship between volcanic plumes and associated tornadoes, waterspouts and lightning, showing for the first time that rotation of a volcanic plume may be the primary cause of these effects," said Sonia Esperanca, program director in the National Science Foundation's (NSF) geosciences directorate.

The research is supported by NSF, via three directorates: geosciences; mathematical and physical sciences; and engineering.

"Rotation is an essential element of a strong volcanic plume," said Pinaki Chakraborty, a computational scientist and engineer at the University of Illinois and the paper's lead author. "By taking into account the rotation, we can better predict the effects of volcanic eruptions."

In 2008, a photograph of the Mount Chaiten eruption in southern Chile showed what appeared to be a volcanic plume wrapped in a sheath of lightning.

A search for references to other occurrences of lightning sheaths led Chakraborty, mechanical engineer Gustavo Gioia and geologist Susan Kieffer to an obscure paper by a sea captain, published in 1811.

In that paper, the sea captain reported his observations of a volcanic vent that emerged from the sea in the Azores archipelago and formed a large volcanic plume.

According to the captain, the plume rotated on the water "like an (sic) horizontal wheel" and was accompanied by continuous "flashes of lightning" and a "quantity of waterspouts."

This conjunction of rotation, lightning and waterspouts (or dust devils on land) is characteristic of a familiar meteorological phenomenon seemingly unrelated to volcanic plumes: a tornadic thunderstorm.

A strong volcanic plume consists of a vertical column of hot gases and dust topped with a horizontal "umbrella." A volcanic mesocyclone sets the entire plume rotating on its axis.

The mesocyclone spawns waterspouts or dust devils, and groups the electric charges in the plume to form a sheath of lightning, as was so prominently displayed in the eruption of Mount Chaiten.

On June 15, 1991, the eruption of Mount Pinatubo in the Philippines was recorded by a satellite snapping hourly images. The images show that the edge of Pinatubo's umbrella was rotating about its center, consistent with the presence of a volcanic mesocyclone, say the scientists.

Satellite images of future volcanic plumes taken at intervals of a few minutes would make it possible to trace the evolution of umbrellas in detail, Gioia said.

In addition, some of the tools commonly used in the study of thunderstorms could be deployed for the study of volcanic eruptions.

"The structure and dynamics of volcanic mesocyclones, as well as the presence of lightning sheaths, might be verified with Doppler radar and lightning mapping arrays, two technologies that have been scarcely used in volcanology," Gioia said.