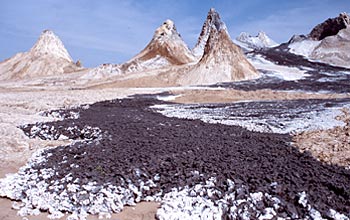 Carbonatite lava that erupted a week before this photo was taken flows from Oldoinyo Lengai volcano.

Science has unearthed the secret to what might have been alchemy at Oldoinyo Lengai volcano in Tanzania.

There, in the ancient East African Rift at a place known to local Maasai people as the Mountain of God, Oldoinyo Lengai spews forth carbon dioxide-laden lavas called carbonatites. The carbonatites line the volcano's flanks like snowballs.

Oldoinyo Lengai is the only place on Earth where carbonatites currently erupt--and where carbon dioxide from a volcano doesn't vanish into thin air as a gas.

In a paper published this week in the journal Nature, scientists report the results of a study of Oldoinyo Lengai's volcanic gas emissions, sampled by the team during a carbonatite lava eruption.

"We now know the origin of one of the most peculiar magmas on Earth," said William Leeman, program director in the National Science Foundation (NSF)'s Division of Earth Sciences, which funded the research.  "These scientists have found that, based on new studies of the chemistry of gas emissions at Oldoinyo Lengai, a very small amount of melting of Earth's mantle, akin to that beneath mid-ocean ridges, can produce carbonatites."

"We were able to collect pristine samples of the volcanic gases because Oldoinyo Lengai was erupting and under tremendous magma pressure at the time," said Tobias Fischer, a volcanologist at the University of New Mexico and lead author of the paper.  "There was minimal air contamination."

"The gases reveal that the carbon dioxide comes directly from the upper mantle, just below the East African Rift," said David Hilton, a geochemist at the Scripps Institution of Oceanography.

"These samples of mantle gases allow us to infer the carbon content of the upper mantle where the carbonatites are produced."

It's about 300 parts per million, a concentration virtually identical to that measured below mid-ocean ridges.

Previous research, mainly based on laboratory experiments, suggested that a higher carbon dioxide content is needed to produce nephelinites and carbonatites.

"Oldoinyo Lengai magmas also contain an unusually high amount of sodium, up to about 35 percent," said Pete Burnard, a geochemist at CNRS-CRPG.

"It's this sodium content that makes the Lengai carbonatites solid rather than gas at the surface. At all other volcanoes on Earth, carbon dioxide 'degasses' into the atmosphere without forming the sodium-rich carbonatite magmas of Oldoinyo Lengai."

The scientists conclude that the upper mantle below the continents and the oceans is a uniform and well-mixed reservoir in which the compositions and abundances of carbon dioxide and other gases like nitrogen, argon and helium are essentially the same.

Hilton, Marty and Burnard are co-authors of the Nature paper.