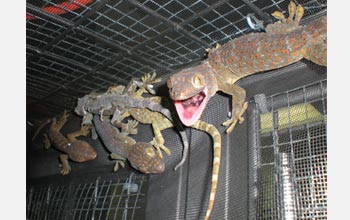 Wildlife imports into the United States are fragmented and insufficiently coordinated, failing to accurately list more than four in five species entering the country.

So reports a team of scientists from the Wildlife Trust, Brown University, Pacific Lutheran University, the Centers for Disease Control and Prevention, and the Global Invasive Species Programme.

A paper on their findings is published in this week's issue of the journal Science.

"As our world, in many senses, grows smaller and smaller with the ease of international travel, the network of connections has increased, facilitating the spread of diseases," said Rita Teutonico, senior advisor for integrative activities in the National Science Foundation's (NSF) Directorate for Social, Behavioral & Economic Sciences (SBE).

SBE co-funded this research through the agency's Human and Social Dynamics (HSD) priority area. HSD was supported by all NSF Directorates, and by NSF's Office of International Science and Engineering and Office of Polar Programs.

"These scientists report a pattern of trade in wildlife that includes a very large number of animals, coupled with a poor understanding of what species are traded," said James Collins, NSF Assistant Director for Biological Sciences. "The findings highlight the need for further research because of the unknown effects these animals and their pathogens can have on native organisms."

A global trade in wildlife generates hundreds of billions of dollars each year. The researchers report that during a six-year period from 2000 through 2006, the U.S. imported more than 1.5 billion live animals.

The animals collected were from wild populations in more than 190 countries around the world, and were intended for commercial sale in the U.S.--primarily in the pet trade.

"This incredible number of imports is equivalent to every single person in the U.S. owning at least five pets," said biologist Katherine Smith of Brown University, co-leader of the study.

More than 86 percent of shipments contained animals that were not classified to the level of species, making it impossible to assess the full diversity of animals imported, or calculate the risk of non-native species introductions or disease transmission.

"Shipments are coming in labeled 'live vertebrate' or 'fish,'" said Daszak. "If we don't know what animals are in there, how do we know which are going to become invasive species or carry diseases that could affect livestock, wildlife--or ourselves?"

The wildlife trade has previously led to disease introductions such as the 2003 monkeypox outbreak following the import of infected African rodents for the pet trade.

"The threat to public health is real, as the majority of emerging diseases come from wildlife," said Smith. "Most of these imported animals originate in Southeast Asia--a hotspot for emerging diseases."

The research team calls for direct measures to decrease the risk of such "pathogen pollution" and proposes guidelines to protect human, animal, and ecosystem health.

"We need to look at all the factors that impact ecosystems--the whole picture," said Daszak. "The global wildlife trade is promoting a process that will impact our health and the health of the planet."