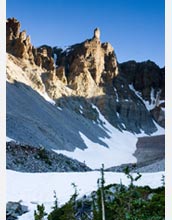 There are very few places in the world where dynamic activity taking place beneath Earth's surface goes undetected.

Volcanoes, earthquakes, and even the sudden uplifting or sinking of the ground are all visible results of restlessness far below, but according to research by Arizona State University (ASU) seismologists, dynamic activity deep beneath us isn't always expressed on the surface.

The Great Basin in the western United States is a desert region largely devoid of major surface changes. The area consists of small mountain ranges separated by valleys and includes most of Nevada, the western half of Utah and portions of other nearby states.

For tens of millions of years, the Great Basin has been undergoing extension--the stretching of Earth's crust.

While studying the extension of the region, geologist John West of ASU was surprised to find that something unusual existed beneath this area's surface.

West and colleagues found that portions of the lithosphere--the crust and uppermost mantle of the Earth--had sunk into the more fluid upper mantle beneath the Great Basin and formed a large cylindrical blob of cold material far below the surface of central Nevada.

It was an extremely unexpected finding in a location that showed no corresponding changes in surface topography or volcanic activity, West says.

West compared his unusual results of the area with tomography models--CAT scans of the inside of Earth--done by geologist Jeff Roth, also of ASU. West and Roth are graduate students; working with their advisor, Matthew Fouch, the team concluded that they had found a lithospheric drip.

Results of their research, funded by the National Science Foundation (NSF), were published in the May 24 issue of the journal Nature Geoscience.

A lithospheric drip can be envisioned as honey dripping off a spoon, where an initial lithospheric blob is followed by a long tail of material.

When a small, high-density mass is embedded near the base of the crust and the area is warmed up, the high-density piece will be heavier than the area around it and it will start sinking. As it drops, material in the lithosphere starts flowing into the newly created conduit.

Seismic images of mantle structure beneath the region provided additional evidence, showing a large cylindrical mass 100 km wide and at least 500 km tall (about 60 by 300 miles).

"As a general rule, I have been anti-drip since my early days as a scientist," admits Fouch. "The idea of a lithospheric drip has been used many times over the years to explain things like volcanism, surface uplift, surface subsidence, but you could never really confirm it--and until now no one has caught a drip in the act, so to speak."

Originally, the team didn't think any visible signs appeared on the surface.

"We wondered how you could have something like a drip that is drawing material into its center when the surface of the whole area is stretching apart," says Fouch.

"But it turns out that there is an area right above the drip, in fact the only area in the Great Basin, that is currently undergoing contraction. John's finding of a drip is therefore informing geologists to develop a new paradigm of Great Basin evolution."

Scientists have known about the contraction for some time, but have been arguing about its cause.

As a drip forms, surrounding material is drawn in behind it; this means that the surface should be contracting toward the center of the basin. Since contraction is an expected consequence of a drip, a lithospheric drip could  well be the answer to what is being observed in the Great Basin.

"Many in the scientific community thought it couldn't be a drip because there wasn't any elevation change or surface manifestation, and a drip has historically always been connected with major surface changes," says West.

"But those features aren't required to have the drip. Under certain conditions, like in the Great Basin, drips can form with little or no corresponding changes in surface topography or volcanic activity."

All the numerical models computed by the team suggest that the drip isn't going to cause things to sink down or pop up quickly, or cause lots of earthquakes.

There would likely be little or no impact on the people living above the drip. The team believes that the drip is a transient process that started some 15-20 million years ago, and probably recently detached from the overlying plate.

"This finding would not have been possible without the incredible wealth of seismic data captured by EarthScope's Transportable Array (TA) as it moved across the western United States," says West.

"We had access to data from a few long-term stations in the region, but the excellent data and 75-km grid spacing of the TA is what made these results possible."

This is a great example "of science in action," says Fouch.

"We went in not expecting to find this.  Instead, we came up with a hypothesis that was not what anyone had proposed previously for the area, and then we tested the hypothesis with as many different types of data as we could find.

"In all cases so far it has held up. We're excited to see how this discovery plays a role in the development of new ideas about the geologic history of the western U.S."