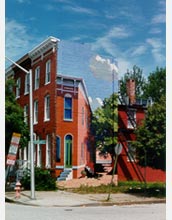 Rats in Baltimore, and likely other urban areas, are loyal to their neighborhoods.

In the rat race of life, one thing is certain: there's no place like home.

Now, a study published this week in the journal Molecular Ecology finds the same is as true for rats as for humans.

Although inner city rodents appear to roam freely, most form distinct neighborhoods where they spend the majority of their lives.

Like any major city, Baltimore, Md., has many lively neighborhoods--each with its own personality. But scientists from the Johns Hopkins University Bloomberg School of Public Health say humans aren't the only Baltimoreans loyal to their 'hoods.

Rats typically stay close to home, rarely venturing more than a city block away.  In the face of danger, however, some rodents can travel as far as seven miles to repopulate abandoned areas.

An understanding of how rats in urban areas are connected provides information about which populations may spread disease, according to Sam Scheiner, program director in the National Science Foundation (NSF)'s Division of Environmental Biology, which funded the research through the joint NSF-National Institutes of Health Ecology of Infectious Diseases program.

Baltimore's port was a once major delivery point for grain, likely how Norway rats were first introduced to the city. Norway rats, also called wharf rats, sewer rats or brown rats, can weigh nearly two pounds and transmit a variety of diseases to humans.

Despite expensive eradication efforts, the number of rats in Baltimore has remained unchanged over the past 50 years, says scientist Greg Glass of Johns Hopkins, who co-authored the Molecular Ecology paper with other researchers from Johns Hopkins and the Yale University School of Medicine.

To understand why, researchers trapped nearly 300 rats from 11 residential areas of Baltimore and conducted genetic studies to see how the rats were related. The scientists found that East Baltimore rats are separated from their unrelated West-side counterparts by a large waterway known as Jones Falls.

Within these hemispheres, rat families form smaller communities of about 11 city blocks. Each community is further divided into neighborhoods that span little more than the length of an average alley. To a city rat, that alley is home sweet home.

The findings suggest that while rats rarely migrate, neighborhood eradication efforts may backfire by encouraging the rodents to repopulate other areas and further spread disease. When you smell a rat, the researchers say, the best solution may be to tackle the problem on a much larger scale--perhaps by targeting entire families at once.