Earth's Biogeochemical Cycles, Once in Concert, Falling Out of Sync 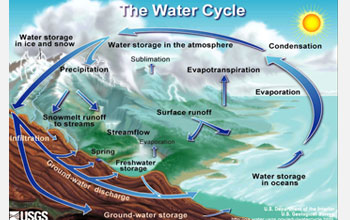 Earth's water cycle is changing as result of global warming and other factors.

What do the Gulf of Mexico's "dead zone," global climate change, and acid rain have in common? They're all a result of human impacts to Earth's biology, chemistry and geology, and the natural cycles that involve all three.

On August 4-5, 2009, scientists who study such cycles--biogeochemists--will convene at a special series of sessions at the Ecological Society of America (ESA)'s 94th annual meeting in Albuquerque, N.M.

"Advancing our understanding of Earth's systems increasingly depends on collaborations between bioscientists and geoscientists," said James Collins, NSF assistant director for biological sciences. "The interdisciplinary science of biogeochemistry is a way of connecting processes happening in local ecosystems with phenomena occurring on a global scale, like climate change."

A biogeochemical cycle is a pathway by which a chemical element, such as carbon, or compound, like water, moves through Earth's biosphere, atmosphere, hydrosphere and lithosphere.

Chemical compounds are passed from one organism to another, and from one part of the biosphere to another, through biogeochemical cycles.

Water, for example, can go through three phases (liquid, solid, gas) as it cycles through the Earth system. It evaporates from plants as well as land and ocean surfaces into the atmosphere and, after condensing in clouds, returns to Earth as rain and snow.

"Historically, biogeochemists have focused on specific cycles, such as the carbon cycle or the nitrogen cycle," said Tim Killeen, NSF assistant director for geosciences. "Biogeochemical cycles don't exist in isolation, however. There is no nitrogen cycle without a carbon cycle, a hydrogen cycle, an oxygen cycle, and even cycles of trace metals such as iron."

Now, with global warming and other planet-wide impacts, biogeochemical cycles are being drastically altered. Like broken gears in machinery that was once finely-tuned, these cycles are falling out of sync.

Knowledge about coupled biogeochemical cycles is "essential to addressing a range of human impacts," said Jon Cole, a biogeochemist at the Cary Institute of Ecosystem Studies in Millbrook, N.Y., and co-organizer of the CBC symposium at ESA.

"It will shed light on questions such as the success of wetland restoration and the status of aquatic food webs. The special CBC conference sessions at ESA will explore future research needs in environmental chemistry, with a focus on how global climate change may impact various habitats."

Earth's habitats have different chemical compositions. Oceans are wet and salty; forest soils are rich in organic forms of nitrogen and carbon that retain moisture.

The atmosphere has a fairly constant chemical composition--roughly 79 percent nitrogen, 20 percent oxygen, and a 1 percent mix of other gases like water, carbon dioxide, and methane.

"Consider that global climate change is caused by increases in carbon dioxide and methane, gases which occupy less than ½ of one percent of the atmosphere. Now more than ever, we need a comprehensive view of Earth's biogeochemical cycles."

The study of coupled biogeochemical cycles has direct management applications.

When the algae die, their decomposition consumes oxygen, creating an area of water roughly the size of New Jersey that is inhospitable to aquatic life. Protecting the Gulf's fisheries--with an estimated annual value of half-a-billion dollars--relies on understanding how coupled biogeochemical cycles interact.

A better understanding of the relationship between nitrogen and oxygen cycles may help determine how best to use nitrogen fertilizers, for example, to avoid dead zones.

Details about the ESA CBC sessions may be found by visiting the links below.

Note: Abstracts and related information are embargoed for use until 12:00 a.m. Mountain Time, Tuesday, August 4, 2009.