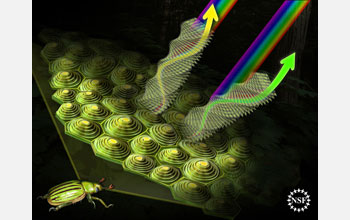 The structure of jewel beetle cells results in striking colors as light hits them from angles.

View an audio slideshow to see the secrets of the shimmer of the jewel beetle.

"Jewel beetles" are widely known for their glossy external skeletons that appear to change colors as the angle of view changes. Now they may be known for something else--providing a blueprint for materials that reflect light rather than absorbing it to produce colors.

Scientists at the Georgia Institute of Technology in Atlanta recently discovered jewel beetles change color because of the light-reflecting properties of the cells that make up their external skeletons, not because of unique, light-absorbing properties in their pigment. They say the finding could be important for industries such as car manufacturers that look to reflective light paints for automobiles.

The journal Science reports the finding in its July 24 issue. The National Science Foundation supports the research.

"The Chrysina gloriosa beetle reflects a green light," said lead researcher Mohan Srinivasarao with Georgia Tech's School of Polymer, Textile & Fiber Engineering. "This has been known for about 100 years, but we've determined the colors we see result from the beetle's physical structure rather than its biology."

When light hits a surface that's difficult to see through, the surface either scatters, absorbs or reflects the light to produce colors. In the case of the jewel beetle's external skeleton, its five, six and seven sided cells spontaneously arrange themselves to reflect light at certain wavelengths that produce green, yellow and red colors.

Srinivasarao postulates that beetle cells form similar to a certain kind of liquid crystal called a 'cholesteric' liquid crystal whose free surface has cone-like structures and that has a helical arrangement of molecules.

Research suggests the cells come from spontaneous arrangement of glucose-like particles called chitin molecules that form as cones like those in a cholesteric liquid crystal. When these cones solidify, they preserve their structures and produce colors as light hits them from different angles.

The beetle's structure also forms helices similar to a cholesteric liquid crystal in that its straight cells sit on or are used to form the curved structure of its external skeleton. Research shows that when the pitch of the helix of cholesteric liquid crystals is close to the wavelength of visible light, they reflect light with specific wavelengths, leading to brilliant metallic colors.

"It's stunning how similar the two things are," said Srinivasarao.

Miniature optical devices and photonics such as those envisioned for microlasers and implantable medical sensors could benefit from the finding. Scientists already are studying ways to commercialize and apply materials that have properties similar to jewel beetles.

In one case, researchers in New Zealand are studying beetles to produce a thin, solid mineral, magnesium oxide, which can be ground into flakes and potentially used as a currency security measure.

Car companies could use the materials to paint automobiles that change color depending on a person's angle of view. More uses could include decorative paints and use on any surface requiring light reflection without light absorption.

Srinivasarao says he doesn't completely understand all the optical properties and behavior of light as it interacts with the beetle's external skeleton. He says a lot more work needs to be done, but it is something he and his team are pursuing.

Vivek Sharma, Matija Crne and Jung Ok Park, all from Georgia Tech, were part of team that worked on this research.