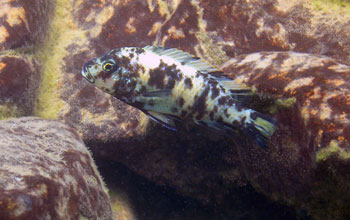 Biologists have genetically mapped the sex chromosomes of several species of cichlid fish from Lake Malawi, East Africa, and identified a mechanism by which new sex chromosomes may evolve.

In research published in this week's issue of the journal Science, biologists Thomas Kocher, Reade Roberts and Jennifer Ser of the University of Maryland describe the genetic basis for two co-existing systems of sexual determination in cichlid fish from Lake Malawi.

"This study marries two evolutionary mysteries: the incredible diversity of fish in the lakes of East Africa and the genetic basis of sex determination," says Sam Scheiner, program director in the National Science Foundation (NSF)'s Division of Environmental Biology, which funded the research. "Simple genetic changes can lead to enormous biological diversity."

In nearly all mammals, the SRY gene determines the sex of offspring and is located on the Y chromosome, which is much smaller than the X chromosome.

But in many other animal groups, the genetic mechanism of sex determination evolves quite rapidly, and the differences between sex chromosomes are harder to observe.

Even sister species of fish may have entirely different sex determination systems. How and why the genetic mechanisms for such an ancient developmental distinction continue to evolve has remained a mystery.

The thousands of closely related cichlid fishes in the lakes of East Africa turn out to be an excellent model system for understanding how the mechanisms of sex determination evolve.

The East African cichlid fishes that inhabit Lakes Malawi, Tanganyika, and Victoria are known for their sexually distinct appearance--the males are generally conspicuous and brightly colored, making them more attractive to females, while the females are drab and brown, making them inconspicuous to predators.

One exception to the uniformly brown pigmentation among female cichlids is the "orange blotch" pattern, which appears in some female cichlids that live in rocky areas of Lake Malawi.

"We believe that the orange blotch color pattern emerged as a new mutation in females and has a selective advantage in providing an alternative form of camouflage," says Kocher.

Depending on the surrounding natural background, this color pattern can help disguise female fish and help them avoid predation.

However males who express this phenotype lack the species-specific color patterns used by females to select their mates.

"This phenotype creates a sexual conflict because the allele is favored in females but not favored in males," explains Roberts, who mapped the gene. "In 'survival of the fittest,' the genes underlying a beneficial trait will increase in frequency, but this is an odd case where the trait is really good for females but really bad for males."

Using genomic techniques, Roberts identified the gene (pax7) that is responsible for this difference in color pattern.

The genetic conflict that started over color was resolved by a new mutation that took over the sex-determining function, and ensured that nearly all orange blotch fish are female.