Vegetation and sand found to be essential in stream life 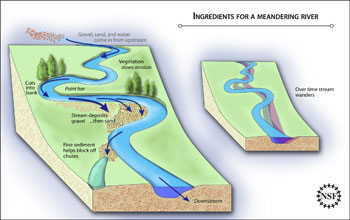 A healthy meandering river calls for vegetation, gravel and sand.

In a feat of reverse-engineering, Christian Braudrick of University of California at Berkeley and three coauthors have successfully built and maintained a scale model of a living meandering gravel-bed river in the lab. Their findings point to the importance of vegetation to reinforce the banks and, surprisingly, to the importance of sand in healthy meandering river life.

The significance of vegetation for slowing erosion and reinforcing banks has been known for a long time, but this is the first time it has been scientifically demonstrated as a critical component in meandering. Sand is an ingredient generally avoided in stream restoration as it is known to disrupt salmon spawning. However, Braudrick and his colleagues have shown that it is indispensable for helping to build point bars and to block off cut-off channels and chutes--tributaries that might start and detract from the flow and health of the stream.

The model is a first for the delicate balance of ingredients of the model flood plain, gravel (sand), fine sediment, vegetation and water to come together in such a way that the stream took life and behaved in the way its healthy counterparts in nature would at 50 to 100 times the size and on the scale of hours instead of years.

In 130 hours after being set into motion, this train-set size (6m x 17m) river eroded its banks and built point bars by depositing model sand and gravel moving around in its environment the way parts of the Mississippi River would over five or seven years.

In nature, this behavior not only achieves a "picture perfect" waterway with pleasing bends, but it yields what earth scientist Braudrick calls "more biological bang for the buck."

"Meandering" generally occurs in streams with moderate slopes and is a common form of river between canyon-bound rivers in the mountains and deltas near the ocean. The physics and geology of meandering streams combine to yield both shallow portions as well as deeper pools. The diversity of habitat is a more hospitable environment to sustain a higher diversity of species. This is in contrast to another stream type with many islands but more uniform and shallower water called "braided streams."

Stream restoration is an extremely complex and delicate science. Because there is no formula to create meandering streams. Successful stream restorers almost require a sixth sense to get everything right and set a sustainable environment into motion, and not every restored stream lasts. Some form extra channels becoming braided streams; some stagnate.

Braudrick and his colleagues hope to shed light on the necessary conditions for sustained meandering in coarse bedded rivers. They have used a clever combination of painted sand that stands in for gravel, a light weight plastic that looks like sugar for sand, and alfalfa sprouts that stand in for the deep rooted vegetation, such as cottonwoods or willows that grow along many meandering rivers in the wild.

The research was funded in part by the National Science Foundation and appears in the Sept. 28, 2009 issue of the Proceedings of the National Academy of Science.