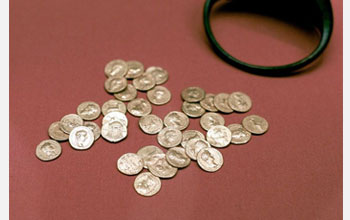 Bundles of buried Roman coins indicate the intensity of the region's violence and political strife.

University of Connecticut theoretical biologist Peter Turchin and Stanford University ancient historian Walter Scheidel recently developed a new method to estimate population trends in ancient Rome and waded into an intense, ongoing debate about whether the state's population increased or declined after the first century B.C.

Using the region's abundance of coin hoards, bundles of buried Roman coins that citizens hid to protect their savings during times of violence and political strife, the researchers determined that Rome's population declined after 100 B.C. and suggested that the alternative scenario of robust population growth was highly implausible.

Turchin and Scheidel applied a unique blend of quantitative modeling and empirical testing normally found in the natural sciences to reach their conclusion. They reasoned that in times of violence people tend to hide their valuables, which are later recovered unless the owners are killed or driven away. As a result, clumps of unrecovered coin hoards are an excellent indicator of intense internal warfare, which has direct impacts on population size.

Debates concerning the population of ancient Rome during the first century B.C. are important because if the minority of adherents, who hold to population growth scenarios are correct, then much of current Roman history would need to be rewritten and it would have enormous impacts on views of the economic potential and social structure of ancient Rome.

The Proceedings of the National Academy of Sciences reports the research in this week's issue. The National Science Foundation supports the work.

Read more in the University of Connecticut press release at: http://today.uconn.edu/?p=5526.