Recent growth in the rings of bristlecone pines in the western U.S. points to warmer temperatures at treeline 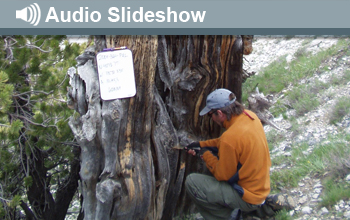 Anyone who has ever cut down a tree is familiar with the rings radiating out from the center of a tree trunk marking the tree's age. Careful study of tree rings can offer much more: a rich record of history and indications of concerns for the future. Researchers Matthew Salzer and Malcolm Hughes of the University of Arizona's Laboratory of Tree-Ring Research and their colleagues have analyzed tree-rings from bristlecone pine trees at the highest elevations, looking for the reasons behind an extraordinary surge in growth over the past 50 years. Their findings appear in the Nov. 16 early online edition of Proceedings of the National Academy of Sciences.

The researchers studied bristlecone pines (Pinus longaeva) at three sites in California and Nevada, close to the upper elevation limit of tree growth. The tree-ring record showed wider rings in recent decades, indicating a surge in growth in the second half of the 20th century that was greater than at any time in the last 3,700 years.

"We've got a pretty strong pointer that temperature plays a part in this," said Malcolm Hughes in describing the work. "So the puzzle is, why does it play a part in it for the trees near the treeline and not for those only 300, 400 feet lower down the mountain than them?"

To solve that puzzle, the research team took core samples, drawing from living and dead trees, which were well preserved in the cold, dry climate existing at the high elevation. They were able to chart ring width going back 4,600 years.

"We're able to overlap the patterns from the dead wood with the inner part of the living trees, and that way move back in time, dating the samples as we go," said Salzer.

They determined that fertilization from increased carbon dioxide in the atmosphere does not adequately explain this kind of growth at the upper-forest level. What they found was that the bristlecone pines at treeline grow faster when temperatures are warmer-in contrast to the trees lower down the mountain, which grow faster with higher amounts of precipitation and when temperatures are cooler. In other words, it's the chilly mountaintop climate that has been limiting growth for these particular trees.

So, the researchers say, that strongly points to warmer temperatures as a cause of the recent surge in growth for bristlecone pines. This finding has implications that reach beyond the state of the trees.

"What it means for the mountains, and the mountain environment, is probably treeline will be moving up, and there are some indications of that occurring," said Salzer. "Other animal and plant species will have to shift up to accommodate the changing conditions."

There is the potential for impact on humans as well.

"High mountains are our water towers. That's where we store water as snow through the winter," said Hughes. "And if we reduce the fraction of year for which that water is there as snow rather than running straight down as rain or evaporating, then this has pretty serious consequences for our future water supplies."

This work was supported by the National Science Foundation through its paleoclimatology program.