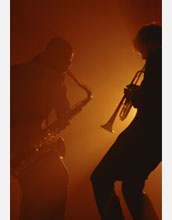 The Journal of Neuroscience reports this week that musicians are better than non-musicians at recognizing speech in noisy environments.  The finding from a study conducted by neurobiologists at Northwestern University in Chicago is the first biological evidence that musicians' have a perceptual advantage for "speech-in-noise."

When tested against non-musicians, musicians demonstrated faster neural timing, enhanced representation of speech harmonics, and less degraded response morphology in noise. That is to say, they were more effective communicating in noisy environments.

This likely occurs because cognitive processes that involve auditory attention and memory strengthen musicians' nervous systems enabling them to sense and discern relevant sounds. Understanding the biological basis for this advantage is the goal of the research, which may also prove beneficial for children and adults, who have difficulty hearing in noise.

Speech perception in noise is a complex task people are faced with every day. Cognitive demands of a musical performance are equally complex in that they require musicians to parse concurrently presented instruments or voices.

The researchers hypothesized that a musician's lifelong experience with "musical stream segregation," that is separating competing voices and musical instruments during a performance, would also give musicians an advantage in "speech-in-noise" environments.

Working with doctoral student Alexandra Parbery-Clark and project manager Erika Skoe, both at Northwestern, the researchers gathered 16 highly-trained musicians and 15 non-musicians. Each participant wore a headset and was fed carefully selected target audio and background noise. Target audio consisted of specific speech sounds, consonants, syllables and so on, while background noise consisted of multi-talker babble spoken by six different speakers.

Kraus and her team compared nerve center responses in each of the participants. They found that in both quiet and noisy environments, the highly trained musicians could more readily discern the target acoustic stimulus.

Kraus says the finding could be important for anyone who has difficulty understanding language in a complex soundscape. "Hearing in noise is hard for everyone but can be particularly difficult for some children with learning problems, that have developmental dyslexia for example, and older adults," said Kraus.

"The implication is that musical experience strengthens biological processes that are useful for extracting meaningful signals from any noisy environment, a classroom, a boardroom, etc."

Studies conducted across a length of time, perhaps years, would provide stronger developmental biological evidence of the educational benefits musical experience may have.

The study was supported by the Science of Learning Centers Program at the National Science Foundation.