Aerosols in the Atmosphere: From Mexico to Japan, Finland to Switzerland, the Same Everywhere 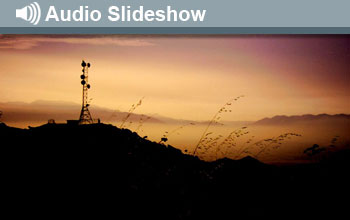 It's no secret that the emissions leaving a car tailpipe or factory smokestack affect climate and air quality.

Until now, scientists have struggled to know where the organic molecules from these emissions go, and what happens to them once they leave their source. Climate and air quality models therefore have been incomplete or less than accurate.

Now a collaborative effort of more than 60 scientists, led by Jose-Luis Jimenez of the University of Colorado, has found common ground in the jumble of aerosols floating through the skies. They report their results in this week's issue of the journal Science.

Through a series of field observations and lab experiments all over the world, the researchers found that organic matter ultimately tends to evolve toward a similar end, regardless of the source or where it occurs in the atmosphere.

"What surprised us is how similar the organic matter looked as we went from the heart of Mexico City to an island in Japan, from a forest in Finland to a mountain in the Swiss Alps," says Jimenez.

The scientists present a solution that will improve the speed and accuracy of prediction models used to understand how aerosols affect climate and human health.

"These scientists have come up with a way to describe changes in aerosols in the atmosphere in a systematic way," says Anne-Marie Schmoltner of the National Science Foundation (NSF)'s Division of Atmospheric and Geospace Sciences, which funded the research. "This work moves us another step toward understanding the role of aerosols in climate."

Organic compounds coat airborne particles like a lacquer of spray paint, and make up as much as 90 percent of all fine particle mass in the atmosphere.

These particles influence cloud formation and therefore rainfall. They also affect human health and can lead to illnesses like asthma, heart disease and lung cancer.

But so far only about 10 to 30 percent of the thousands of individual compounds have been identified. Past research has focused on following specific molecules with the idea that these compounds remain relatively static once they enter the atmosphere.

Recent discoveries show that the life cycle of these compounds is much more complex, with organic molecules reacting many times in several different ways.

Attempts by atmospheric scientists to track this life cycle often leave researchers with a sea of divergent paths to follow.

To find some order in this chaos, Jimenez and his colleagues began looking at organic particles with a more holistic mindset.

Donahue created a chemical "map" that provides the first clear visualization of how organic aerosols change once they become a part of the particle soup.

The map tracks two key properties--volatility, or the tendency to evaporate, and the oxygen-to-carbon ratio--that evolve as aerosols make their way through the atmosphere.

The oxygen-to-carbon ratio is an indicator of how much the organic matter is gaining oxygen and building up on particles floating in the air.

This particle soup can be boiled down into a few measurable characteristics, such as the oxygen-to-carbon ratio, which are key variables for predicting climate and air quality.

"Using a novel aerosol mass spectrometer, we found that the atmosphere blurs the differences between aerosols emitted by different sources relatively quickly," says Manjula Canagaratna, a co-author from Aerodyne Research in Boston. "This is potentially a very important simplification," he says, one that's key to improving air quality and climate models.

"We're providing a key piece of machinery that is needed to make accurate predictions of air quality and climate, and that is relatively simple and practical to use," says Jimenez.

If these findings are incorporated into future climate and air-quality modeling and policy assessments, says Jimenez, asthma sufferers, for example, may soon be able to breathe a bit easier.

This research also was funded by the U.S. Department of Energy, and the U.S. Environmental Protection Agency, and was made possible by the collaboration of scientists from more than 30 institutions, including international collaborators from England, Switzerland, China, Japan, Mexico, Germany, Sweden and Finland.