It's Not Your Fault--A Typical Fault, Geologically Speaking, That Is 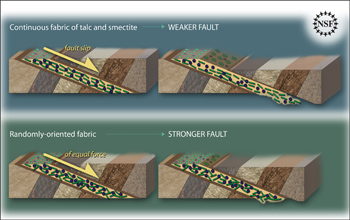 Some geologic faults that appear strong and stable, slip and slide like weak faults. Now an international team of researchers has laboratory evidence showing why some faults that 'should not' slip are weaker than previously thought. Their findings are detailed in this week's edition of the journal Nature.

"Low-angle normal faults--faults that dip less than 45 degrees--are a problem," said Chris Marone, professor of geosciences, Penn State. "Standard analysis shows that these faults should not slip because it is easier to form a new fault than to slip on this orientation."

However, field evidence shows that low-angle normal faults do slip. One explanation is that they act more like weak faults, slipping and sliding. Previous laboratory experiments indicated that the fabric of the rocks in the fault had too much friction for the faults to slide easily. The researchers wanted to test the material in the fault in a form closer to what occurs naturally.

"The standard way to test the friction of the rocks in a fault is to take some of the rock and grind it up into a powder," said Marone. "The powder is then tested in an apparatus that applies shear forces to the materials measuring the amount of force it would take to move sides of the fault."

These conventional measurements indicated that low-angle normal faults have too much friction to move, but the reality is that they do move.

Cristiano Collettini, researcher at Geologia Strutturale e Geofisica, Universita degli Studi di Perugia, Italy, got his way because of an unusual low-angle normal fault on the Isle of Elba. The Zuccale fault sits exposed on the beach so it is easy to gather large amounts of rock.

"Cristiano was insistent on checking the shear forces under conditions as close to the natural situation as possible," said Marone. "I thought what he wanted to do was impossible because the rocks cannot easily be cut into a shape that we can work with. We need a prismatic wafer of the material."

The researchers first ground the material and tested the mechanical properties of the powder in the conventional way. The ground powder did produce sufficient frictional forces to prevent slipping. This is what they expected.

"Normally the rock we use from fault zones comes from below the surface and we only get small amounts to work with," said Marone. "With the samples from Elba we could use a had rotary cutter and carve a wafer from the rock with the same orientation that would slip in the ground."

The wafers were about two by two inches square and an eighth of an inch thick. The researchers found that material prepared in this way was very weak when sheared in one direction moving almost like a deck of cards pushed in opposing directions.

The reason for the low friction is small patches of talc and clays like montmorillonite that allow the material to slide.

The researchers, who also include Andre Niemeijer, former Penn State postdoctoral fellow now at Instituto Nazionale Di Geofisica Vulcanologia, Rome, and Cecilia Viti, Universita degli Studi di Siena, Italy, note, in the Dec. 17 issue of Nature that "fault weakness can occur in cases where weak mineral phases constitute only a small percentage of the total fault rock and that low friction results from slip on a network of weak phyllosilicate-rich surfaces that define the rock fabric."

Talc and many chemical varieties of clay minerals these clays are often found in fault materials. In areas where connected layers of weak minerals occur, geologists have concluded that the connections create weak fabric that enables easy slippage. But when clays or talc create intermittent flake-like surface coatings, they provide far more slip than when they are simply powdered. The discontinuous flakes and coatings that the researchers found were previously considered insufficiently complete to weaken the fault.

"These low-angle normal faults do not look like they will do anything but creep along, but they could have earthquakes," said Marone. "There are places in central Italy, for example, where faults like this have had small earthquakes."

"These findings may be widely applicable to other fault settings, depending on the local stresses creating the faults," said James Dunlap, program manager in NSF's Geosciences Directorate. "In this way, this work is exciting and timely for those in the earthsciences community, as it may well prove advantageous to society, especially for those communities, on or near fault lines, most susceptible to earthquakes."