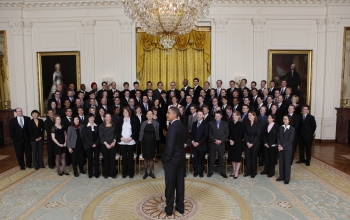 At the White House yesterday, President Barack Obama bestowed on 100 men and women the United States government's highest honor for scientists and engineers in the early stages of their independent research careers--the Presidential Early Career Award for Scientists and Engineers (PECASE). Among the awardees, twenty were nominated by the National Science Foundation. These awardees come from universities around the country, and excel in research in a variety of scientific disciplines: biological sciences, computer and information science and engineering, education and human resources, engineering, geosciences, mathematical and physical sciences, and social, behavioral and economic sciences.

All NSF PECASE awardees are drawn from a pool of individuals who have already been selected through rigorous peer review to receive five-year grants through the Faculty Early Career Development (CAREER) Program. CAREER awardees are those who have proven themselves exemplary in integrating research and education within the context of the mission of their organization. The competition is rigorous: in 2008, NSF made 455 CAREER awards, from more than 2500 proposals reviewed.

The Presidential Early Career Awards embody the high priority the Administration places on producing outstanding scientists and engineers to advance the nation's goals and contribute to all sectors of the economy.

The President's meeting with the PECASE winners highlighted the administration's recognition that America's global leadership in science and technology is not automatic, but depends on constantly cultivating new generations of ambitious and dedicated explorers in the sciences and engineering. There was also an acknowledgement that national nourishing of curiosity starts even earlier than that, in the way we teach children about science, technology, engineering and mathematics. That's why this event resonates strongly with those of last week, when the President announced an expansion of the "Educate to Innovate" campaign to encourage and inspire young students to pursue studies in science, technology, engineering and math (STEM).

The awards, established by President Clinton in February 1996, are coordinated by the Office of Science and Technology Policy within the Executive Office of the President. Awardees are selected on the basis of two criteria: pursuit of innovative research at the frontiers of science and technology and a commitment to community service as demonstrated through scientific leadership, public education, or community outreach.

This year's recipients were first announced over the summer, and received their awards and met with the President Wednesday. Their names and Federal Departments and Agencies can be seen in the official White House press release issued in July.

Note to regional reporters: For more information about, or interviews with, local winners of the Presidential Early Career Award for Scientists and Engineers, please contact the awardees' home institution or agency.