Asia's economic growth has side effect 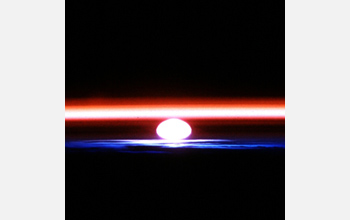 Pollution in the stratosphere is clearly visible in this image in the thin red line.

The economic growth across much of Asia comes with a side effect: pollutants from the region are wafting up to the stratosphere during monsoon season.

The new finding, in a study led by scientists at the National Center for Atmospheric Research (NCAR) in Boulder, Colo., provides additional evidence of the global nature of air pollution and its effects far above Earth's surface.

Results of the international study are published today in a paper in Science Express.

The research was funded by the National Science Foundation (NSF), NCAR's sponsor, along with NASA and the Canadian Space Agency.

"These results present intriguing insights into the interactions of monsoons and chemical emissions generated in the heavily industrialized region of south Asia," said Anjuli Bamzai, program director in NSF's Division of Atmospheric and Geospace Sciences, which funded the research.

"Aided by monsoon circulation, pollutants such as hydrogen cyanide are lifted aloft from the troposphere all the way to the lower stratosphere," Bamzai said. "At such high levels they can circulate around the globe with a residence time of several years."

Those vertical movements provide a pathway for black carbon, sulfur dioxide, nitrogen oxides, and other pollutants to ascend into the stratosphere, about 20-25 miles above the Earth's surface.

"The monsoon is one of the most powerful atmospheric circulation systems on the planet and it happens to form right over a heavily polluted region," says NCAR scientist William Randel, the lead author of the paper. "As a result, the monsoon provides a pathway for transporting pollutants up to the stratosphere."

Once in the stratosphere, the pollutants circulate around the globe for several years. Some eventually descend back into the lower atmosphere, while others break apart.

The study suggests that the impact of Asian pollutants on the stratosphere may increase in coming decades because of the growing industrial activity in China and other rapidly developing nations.

In addition, climate change could alter the Asian monsoon, although it remains uncertain whether the result would be to strengthen or weaken vertical movements of air that transport pollutants into the stratosphere.

Randel says more research is needed into the possible effects of the pollutants. When sulfur rises into the stratosphere, it can lead to the creation of small particles called aerosols that are known to influence the ozone layer.

The monsoon transport pathway may also have effects on other gases in the stratosphere, such as water vapor, that affect global climate by influencing the amount of solar heat that reaches Earth.

Scientists have long known that air over the tropics moves upward between the lower atmosphere and the stratosphere, part of a large-scale pattern known as the Brewer-Dobson circulation.

But Randel and his colleagues suspected that the monsoon might also transport air into the stratosphere during the Northern Hemisphere's summer months.

This could explain satellite measurements showing high levels of stratospheric ozone, water vapor and other chemicals over Asia during summer.

To isolate the role of the monsoon on the stratosphere, the researchers focused on a chemical, hydrogen cyanide, which is produced largely as a result of the burning of trees and other vegetation.

The parcels of air over the tropical ocean that are lifted to the stratosphere by the Brewer-Dobson circulation contain low amounts of hydrogen cyanide, which breaks up over the ocean.

But air over land that gets lifted up by the monsoon contains high levels of the chemical, especially during times of year when Asia has widespread fires, many set to clear land for agriculture.

When the scientists examined satellite measurements, they detected significant amounts of hydrogen cyanide throughout the lower atmosphere and up into the stratosphere over the monsoon region.

Satellite records from 2004 to 2009 showed a pattern of increases in the chemical's presence in the stratosphere each summer, correlating with the timing of the monsoon.

The observations also showed hydrogen cyanide, which can last in the atmosphere for several years before breaking up, moving over the tropics with other pollutants and then circulating globally.

The researchers used computer modeling to simulate the movement of hydrogen cyanide and pollutants from other sources, including industrial activity.

The model indicated that emissions of pollutants over a broad region of Asia, from India to China and Indonesia, were becoming entrained in the monsoon circulation and transported into the lower stratosphere.

"This is a vivid example of pollutants altering our atmosphere in subtle and far-reaching ways," Randel says.