On 'Earth Week,' World Is No Longer Our Oyster 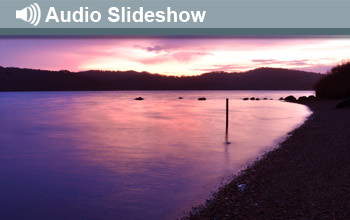 The world is no longer our oyster.

As we prepare to celebrate Earth Day on April 22, we can add another species, one of widespread ecological and economic importance, to the list of the beleaguered.

From East Coast to West and around the world, global warming and its effects have descended upon shellfish reefs, particularly those formed by the Olympia oyster.

More than one-third of the world's human-caused carbon dioxide emissions have entered the oceans, according to Brian Gaylord, a biological oceanographer at the Bodega Marine Laboratory of the University of California at Davis.

Even with small changes in acidity, seawater becomes corrosive to the shells of aquatic organisms.

That's not good news for most marine life, especially for oysters.

Gaylord is investigating the consequences of this increasing ocean acidity on the growth of larval and juvenile Olympia oysters native to the U.S. West Coast.

"Such early life stages can be extremely sensitive to environmental stresses like ocean acidification," says Gaylord.

"These stages operate as bottlenecks that drive overall population numbers.  If larval and juvenile Olympia oysters decline as a result of an acidifying ocean, what does that mean for the species as a whole?"

Likely nothing good, he and colleagues say.

"Changes now happening in the ocean's chemistry are expected to continue far into the foreseeable future," says David Garrison, director of the National Science Foundation (NSF)'s biological oceanography program, which funds Gaylord's research. "They may have myriad effects on marine animals."

Gaylord conducted experiments on larvae and juveniles produced by adult oysters in Tomales Bay, California. Adults were collected in the bay, then held at the Bodega Marine Laboratory until they released larvae.

In the lab, the free-swimming larvae were reared into early juvenile life.

Carbon dioxide concentrations in laboratory seawater were controlled to match present-day conditions in the oceans, 380 parts per million (ppm), as well as two carbon dioxide scenarios projected to occur by the year 2100 (540 and 970 ppm).

Mid-way through the larval phase at day nine, oysters in the high carbon dioxide treatment had shells that were 16 percent smaller than those reared in control, or ambient, conditions.

These effects continued through the time the larval oysters settled onto hard substrate at day 12. Shell size was seven percent smaller for oysters in the 970 ppm treatment than in the control group.

By a week later, the effects were dramatically magnified. The bottom-dwelling juveniles in the 970 ppm treatment had grown 41 percent less than juveniles under control conditions.

The consequences persisted, even after the juveniles from all treatments had been returned to present-day conditions.

"One and a half months after being transferred back to normal seawater," says Gaylord, "juveniles that had come from the high carbon dioxide environment were still 28 percent smaller than oysters reared for the entire experiment in control conditions."

The results strongly suggest that the effects of ocean acidification on oyster larvae persist well into the juvenile phase, he says, with potential consequences for oyster populations.

"If similar impacts happen to species beyond the Olympia oyster, there could be repercussions for oysters around the world."

Globally, 85 percent of shellfish reefs have been lost, making oyster reefs one of the most severely threatened marine habitats on the planet.

"Shellfish reefs in some places are at less than 10 percent of their former abundance," says Garrison. "Oysters have gone extinct in many areas, especially in North America, Australia and Europe."

Just as coral reefs are critical to tropical marine habitats, shellfish like oysters are the ecosystem engineers of bays and estuaries, creating dwelling places for countless plants and animals that find refuge in their three-dimensional structure.

The surface area of an oyster bed across its dips and folds and crevices may be 50 times greater than that of an equally extensive flat mud bottom.

Oysters have supported civilization for millennia, from the ancient Romans to railroad workers in California in the 1880s. In the 1870s, eastern oyster reefs extended for miles along the James River in Chesapeake Bay. By the 1940s, they had largely disappeared.

"It's unclear whether we will ever be able to return to that by-gone era," says Gaylord. "The constellation of environmental and other pressures on oysters--including the consequences of ocean acidification--places them at grave risk."

Gaylord and colleagues presented early results of their research at the Ocean Sciences Meeting in Portland, Oregon, in February. They plan to publish a paper with updated findings later this year.