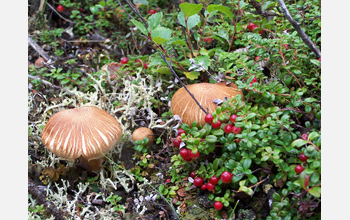 Many species of fungi proliferate in Alaska's boreal forest.

In dark, rich soils on every continent, microbes dealing with the effects of climate change aren't accelerating global warming the way scientists had predicted, a study by researchers at the University of California at Irvine, Colorado State University and Yale University shows.

Results of the study appear in a paper published on-line this week in the journal Nature Geoscience. The work was supported by the National Science Foundation (NSF) and U.S. Department of Energy.

"Microbes continually surprise us in the diverse ways they respond to environmental conditions," said Saran Twombly, program director in NSF's Division of Environmental Biology, which funded the research along with NSF's Advancing Theory in Biology program, part of the Directorate for Biological Sciences Office of Emerging Frontiers.

"Microbes play a central role in ecological processes," said Twombly, "and their responses change our understanding of natural communities in fundamental ways."

Conventional scientific wisdom holds that even a few degrees of human-caused climate warming will shift fungi and bacteria that consume soil-based carbon into overdrive, and that their growth will accelerate the release of carbon dioxide into the atmosphere.

But a research team led by ecologist Steve Allison of UC Irvine took a closer look, and found something different.

As their numbers decline, they release decreasing amounts of climate-warming greenhouse gases.

"Microbes are the engines that drive carbon cycling in soils," said Allison.

"In a balanced environment, plants store carbon in the soil and microbes use that carbon to grow. Enzymes produced by microbes convert soil carbon into atmospheric carbon dioxide."

A previous study by Mark Bradford of Yale and Matthew Wallenstein of Colorado State found that microbes became less efficient at decomposing soil carbon after several years of experimental warming.

They asked Allison to develop a computer model to test how adaptation of microbes to climate change might affect the carbon cycle.

"The issue we have in predicting whether soil carbon loss will accelerate climate warming is that the microbial processes causing this loss are poorly understood," said Bradford. "More research in this area will help reduce uncertainties in climate prediction."

In the resulting computer model, microbes became less efficient at converting their carbon food source into biomass as climate warmed.

In short, the microbes were not well adapted to a warmer climate. As their growth slowed, so did enzyme production.

"When we developed a model based on the actual biology of soil microbes, we found that soil carbon may not be lost to the atmosphere as the climate warms," Allison said. "Conventional ecosystem models that didn't include enzymes did not make the same predictions."

The next steps include studying more microbes and more ecosystems.

"Nearly one-third of all soil-based carbon is sequestered in permafrost or Arctic regions, which might respond differently to warming," said Wallenstein, who is researching sites in Greenland and Alaska.

"We need to develop more models to include microbe diversity," Allison said. "But the general principle that's important in our model is the decline of carbon dioxide production after an initial increase."