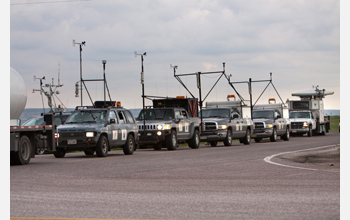 On the road again: VORTEX2 scientists take to the field in search of tornadoes.

In the largest and most ambitious effort ever made to understand tornadoes, more than 100 scientists and 40 support vehicles will hit the road again this spring.

The project, VORTEX2--Verification of the Origins of Rotation in Tornadoes--is in its final season: May 1st through June 15th, 2010.

VORTEX2 is supported by the National Science Foundation (NSF) and the National Oceanic and Atmospheric Administration (NOAA).

Scientists from more than a dozen universities and government and private organizations will take part. International participants are from Italy, Netherlands, United Kingdom, Germany, Canada and Australia.

The questions driving VORTEX2 are simple to ask but hard to answer, says lead scientist Josh Wurman of the Center for Severe Weather Research (CSWR) in Boulder, Colo.

"Current warnings have only a 13-minute average lead time, and a 70 percent false alarm rate," says Brad Smull, program director in NSF's Division of Atmospheric and Geospace Sciences. "Can we issue reliable warnings as much as 30, 45 or even 60 minutes ahead of tornado touchdown?"

They will use a fleet of instruments to literally surround tornadoes and the supercell thunderstorms that form them.

An armada will be deployed, including:

"VORTEX2 is fully nomadic with no home base," says Wurman.  Scientists will roam from state to state in the U.S. Plains following severe weather outbreaks.

"When we get wind of a tornado," says Wurman, "we spring into action."