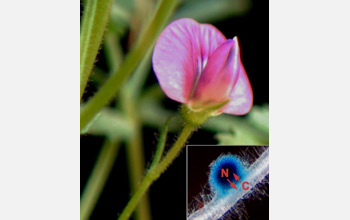 Chickpea and root nodule, an organ in legumes associated with nitrogen-fixing bacteria.

To support basic research that will build a foundation for generating sustainable, science-based solutions to agricultural problems in developing countries, the National Science Foundation (NSF) has awarded 15 grants in the inaugural year of the Basic Research to Enable Agricultural Development (BREAD) program.

The five-year program is jointly funded with the Bill & Melinda Gates Foundation.

Through the partnership between the Gates Foundation and the BREAD program, NSF is supporting international projects, with funding provided to both U.S. institutions and their international collaborators.

The awards in this first year of funding will allow scientists to employ novel, creative approaches and technologies to address common constraints faced by small-holder farmers.

These include a multitude of stresses affecting both crops and animals, such as drought and diseases and pests prevalent in the developing world.

"The interest in BREAD has been overwhelming," said Joann Roskoski, NSF acting assistant director for Biological Sciences. "More than 130 U.S. institutions in 45 states, partnering with more than 200 institutions in 68 countries, submitted proposals for the inaugural competition.

"Projects were in fields as diverse as the genetic improvement of crops and animals, control of diseases and pests, the chemistry and biology of soils and water, and engineering.The awards reflect this diversity."

"By engaging leading scientists worldwide, the BREAD program will creatively address critical agricultural challenges," said Rob Horsch, deputy director of the Agricultural Development Program at the Bill & Melinda Gates Foundation. "Resulting solutions will help small farmers in the developing world grow more and earn more so they can lift themselves and their families out of hunger and poverty."

Scientists from Centers of the Consultative Group for International Agriculture (CGIAR) and from the private sector will also participate in some of the projects.

A complete list of 2010 BREAD awards can be accessed at http://www.nsf.gov/bio/pubs/awards/bread10.htm.